Lee was the only South Korean chosen to be on "The 2020 Billboard Impact List" that recognizes 22 individuals for their influence over the future of the global music industry, according to S.M.

"SuperM, the 'supergroup' recruited from members of other Korean boy bands and described by Lee as his 'new vision for K-pop,' became the first Korean act to debut its first album on the Billboard 200," Billboard said in its blurb.

It also mentioned that Lee stressed that S.M.'s dedication to "culture first, economy next" shapes his partnership with Global Citizen to hold the charity concert "Global Goal Live: The Possible Dream" in Seoul in September. 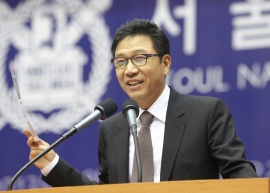 Other figures on the list include Melissa Ormond of US-based AEG Presents, who has produced concerts for such artists as Katy Perry and Alicia Keys, as well as Alex Garllardo, who heads Sony Music Latin.

S.M., which Lee established in 1995, is home to a slew of prominent K-pop artists, including Super Junior, Girls' Generation, Shinee, Exo and Red Velvet. (Yonhap)