US Secretary of State Mike Pompeo on Tuesday called for collective efforts to safeguard the Strait of Hormuz, a South Korean official said, suggesting that Washington seeks increased commitments from Seoul.

The meeting came as Seoul has been looking at options to support U.S.-led security operations in the Middle East amid heightened tensions between Washington and Tehran. In particular, the question of deploying South Korean troops to the Strait of Hormuz off Iran has forced Seoul to weigh its commitment to its alliance with the US against its trade relations with Iran. 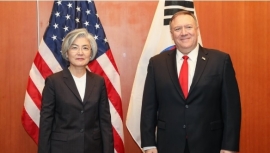 "Overall, (Pompeo) emphasized the importance of collective efforts by the international community," the South Korean government official told reporters in Palo Alto when asked if there was a request for troops deployment.

He said Pompeo pointed to the repercussions for the global economy from instability in the Strait of Hormuz, including a hike in oil prices, and stressed the need for all countries to contribute to bringing stability to the region.

In response, Kang said stability in the Middle East is important to South Korea as well because of the large volumes of petroleum-related trade that passes through the strait, according to the official. She added that the highest priority for Seoul is the safety of South Korean citizens and businesses in the region, and assured Pompeo that Seoul is looking at ways to contribute to the international efforts from "multiple angles."

"With no progress in North Korea-U.S. dialogue, we believe it is important for the South and the North to have dialogue and maintain the momentum for North Korea's engagement," she said, adding that inter-Korean relations and U.S.-North Korea relations cannot always move at the same pace.

Seoul's foreign ministry said in a press release that the two sides "exchanged views on managing the situation to maintain the momentum for and resume the denuclearization dialogue process through close South Korea-US coordination."

They also held in-depth discussions on further strengthening the bilateral alliance while recognizing that the countries have expanded their cooperation in a mutually beneficial manner, the ministry said.

The US State Department issued a readout stating that the two top diplomats discussed regional and global issues, including the importance of trilateral cooperation with Japan.

"Secretary Pompeo and Foreign Minister Kang reaffirmed continued close US-ROK coordination on North Korea," it said, referring to South Korea by the acronym of its formal name, the Republic of Korea. "The Secretary and Foreign Minister Kang praised the enduring strength of the U.S.-ROK Alliance and reiterated their commitment to cooperation across the U.S. Indo-Pacific Strategy and the ROK New Southern Policy."

Kang and Pompeo later held trilateral talks with their Japanese counterpart, Toshimitsu Motegi, during which they discussed three-way cooperation on the North Korean nuclear issue, as well as their assessments of the situation in the Middle East, according to the South's foreign ministry.

"The three ministers reaffirmed the importance of South Korea-US-Japan coordination for achieving the joint goal of the complete resolution of the North Korean nuclear issue and regional peace and stability," it said.

According to the State Department, the three sides agreed on the importance of the US alliances with South Korea and Japan to security and prosperity in the region and the world.

"They also stressed that trilateral cooperation is essential to ensure the future of peace in the region," the department said in a separate readout. (Yonhap)