The world’s biggest boy band from South Korea has teamed up with internationally acclaimed artists and curators to hold joint exhibitions around the globe. 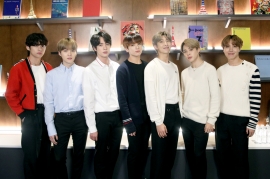 Titled “Connect, BTS,” the band’s latest project involved collaborating with artists and curators to showcase artworks that are in line with the boy band’s philosophy, which stresses on diversity and supports those who are marginalized.

A total of 22 international artists have joined the event directed by Lee Dae-hyung, the director of the Korean Pavilion at the Venice Biennale in 2017. Five curators -- Ben Vickers and Kay Watson in London, Stephanie Rosenthal and Noemie Solomon in Berlin, and Thomas Arnold in New York -- will curate shows as part of the project.

Under the name of the Korean boy band, contemporary art exhibitions will be held in five major world cities over the course of three months, starting Jan. 15 at the Serpentine Gallery, one of London’s most prestigious galleries. The London show will feature Jakob Kudsk Steensen’s work “Catharsis.”

“Connect, BTS” will also take place in Berlin, Buenos Aires and Seoul on different dates between January and March.

“This project aims to redefine the relationships between art and music, the material and immaterial, artists and their audiences, artists and artists, and theory and practice,” the project’s official website said.