The police said Tuesday they will begin follow-up work to execute the bills expanding their investigative jurisdiction, in cooperation with the Ministry of Justice and other relevant agencies.

The National Police Agency said its existing task force team for reforming the criminal investigation system will lead the preparations for at least six months.

The parliament on Monday passed revisions to the criminal procedure laws, widely branded as the “prosecution reform bills,” which entail taking the prosecution’s investigative prerogative away and handing them over to the police. 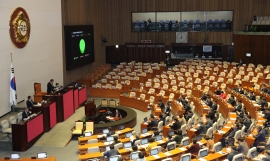 During the Monday plenary session, the National Assembly passed a set of bills granting police an unprecedented investigative jurisdiction. (Yonhap)

“Prosecutor General Yoon Seok-youl has repeatedly stated that as a public official he will respect the decisions of the National Assembly,” the Supreme Prosecutors’ Office said.

But prosecutors on the front line are voicing opposition, including Kim Woong, a celebrated prosecutor who led the prosecution’s response to the criminal procedure law’s revisions.

“These bills aren’t a reform, but the most abominable conspiracy and regression since democracy was first instituted in this country,” Kim said on Monday.

He said the prosecution’s investigative functions were curtailed as its probes began to target the Moon Jae-in administration.

“The prosecution’s criminal investigation bureau is now left as a hollow shell.”

Chairman of the main opposition Liberty Korea Party, Hwang Kyo-ahn, took to Facebook on Tuesday to criticize the legislative move.

Hwang said the new bills would act as a shield for the Moon administration against criminal investigations.

He also pointed out the revisions were approved in the absence of the main opposition party -- with 165 out of 167 lawmakers of the ruling Democratic Party and four minor parties voting overwhelmingly in favor.

Meanwhile, the central police agency welcomed the due changes and forecast a rosy outlook for police-prosecution cooperation.

Lee Eun-ae, chief of the investigation system reform division at the agency, told The Korea Herald that “a mutual assistance and accountability” will be enabled between the two investigative agencies.

“Until now, the prosecution reigned over the police. But under the new system, we can operate as equals, with more checks and balances,” she said.

The revised bills endow the police with unprecedented investigative jurisdiction, most notably the autonomy to conduct and conclude investigations, for the first time since the Criminal Procedure Code came into place in 1954.

This effectively reduces the prosecution’s authority in criminal investigations.

Police probes will no longer be subject to prosecution supervision, and the police can turn down prosecutors’ requests for complementary investigations. Not all cases filed with the police will be referred to prosecutors for checking during an investigatio, prior to an official submission for indictment.

In addition, the scope of crimes investigated by the prosecution will be limited only to certain white-collar and political offenses.

Criminal justice professor Oh Yoon-sung at Soonchunhyang University said that police will have to be “extremely cautious” in wielding their new powers and refrain from repeating history.

“The police are given what they have craved for long -- a part of the prosecution’s jurisdiction. But with greater power comes greater responsibility,” he said in a phone interview.

“Under Rhee Syngman’s presidency, the police worked for the government as political police,” he said. “The police should be wary of degenerating into tools for those in power.”