Victims of wartime forced labor and their descendants based in Gwangju and South Jeolla Province filed a class-action lawsuit against Japanese firms on Tuesday, seeking financial restitution amid soured Seoul-Tokyo relations over the colonial-era issue. 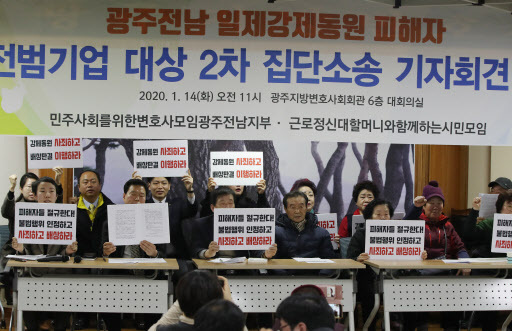 (Yonhap)
The progressive Lawyers for a Democratic Society and a civic group advocating for Korean victims filed the suit on their behalf.

“Through the lawsuit, the Japanese government and Japanese firms’ illegal acts against humanity will be laid bare once again,” the organizations said in a press conference Tuesday, adding that improving Seoul-Tokyo relations would be difficult without Japan atoning for its wartime wrongdoings.

Court proceedings for the first class-action suit filed in April last year by 54 plaintiffs are being postponed as the Japanese firms have refused to accept the court documents. It is necessary for the firms to receive the documents for the court to conclude its deliberations and make a ruling.

Japan-Korea relations have been strained since Korea’s Supreme Court in 2018 ordered a Japanese firm to compensate four Koreans in the first such ruling on the forced labor issue. No action has been taken by Japan or the firm to address the court ruling.

Korea urges Japan to respect the ruling, but Japan claims the colonial-era matter was settled by a 1965 treaty normalizing bilateral ties.

Meanwhile, President Moon Jae-in on Tuesday called on Japan to work together to resolve the issue of compensating World War II forced labor victims, saying Korea’s proposals alone are not the solution.

Moon, however, said the solution should be based on what the victims can agree to and accept.