Violinist Lee Ji-yoon may be only 28 years old, but she is a musician trained in the legacy of a 450-year-old orchestra. In 2020, she will be sharing the legacy with Korean audiences at Kumho Art Hall Yonsei.

The prodigy-turned-virtuoso of the Staatskapelle Berlin was selected as Kumho Art Hall’s artist-in-residence for 2020. Each year the art hall run by the Kumho Art Cultural Foundation selects an under-30 classical musician for its program.

Lee took the classical music scene by storm in 2017 when she was appointed concertmaster at the Staatskapelle Berlin. She is the first Asian woman and the youngest concertmaster of the German orchestra founded in 1570. Celebrated conductor Daniel Barenboim has been leading the orchestra since 1992, the year Lee was born. 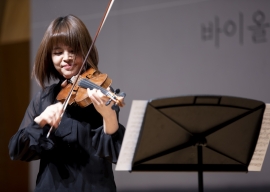 “Personally, I think it was freshness,” Lee said, talking about why the orchestra steeped in history and tradition chose Lee as its concertmaster at a press event held Tuesday at Kumho Art Hall Yonsei in Sinchon, western Seoul.

“Many of the orchestra members have been with the orchestra for more than 30 years. It was time for a generation shift to happen,” she said, humbly describing the appointment as “beginner’s luck.”

She added, “The orchestra took value in my international aspect, too.”

Lee recalled it was not easy to begin her initial five-year tenure as a concertmaster of such a historic orchestra from such a young age. But less than a year later, she was granted lifetime tenure at the orchestra.

“Of course I was scared at first. I had to begin (my professional career) without any experience among experienced people. But it is in my character to not be scared of making mistakes,” she said. 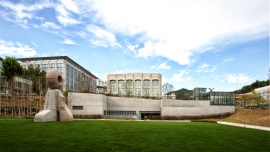 As the art hall’s artist-in-residence, Lee will hold four performances at the concert hall at Yonsei University throughout the year, with programs of her own creation.

“I want to share the energy I felt in Berlin with the Korean audience. I hope that the audience can see Lee Ji-yoon as a person, not just a violinist,” she said. After completing her studies in Berlin, Lee continued to stay in the city.

“Thursday’s program consists of composers that I really like,” Lee said. “To be selected as an artist-in-residence is an honorable experience. It is a once-in-a-lifetime opportunity for me to present works I like without limitations.”

More recitals by Lee are to follow in May, August and December. For more information, check Kumho Art Hall’s website at www.kumhoarthall.com/eng/.