BTS swept up nine awards, including the top three prizes -- Album of the Year, Artist of the Year and Song of the Year -- while Itzy and TXT took home Best New Female Artist and Best New Male Artist, respectively. 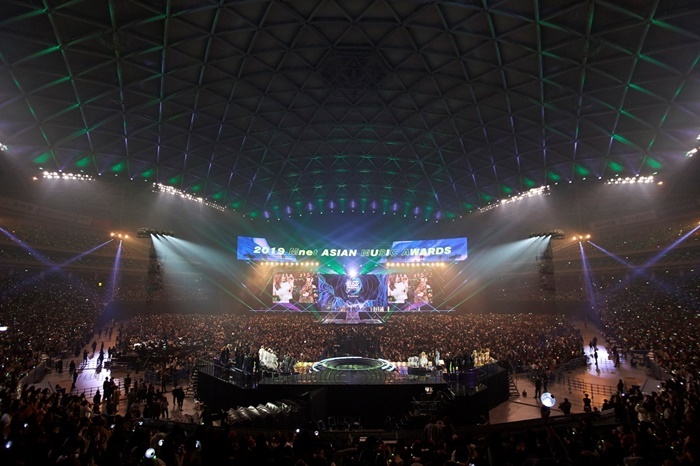 (CJ ENM)
While fans cheered on their favorite acts’ achievements, many viewers thought the show came across as rushed and lacking in energy. It had already faced criticism over the choice of the location as well as the host channel’s ongoing vote-rigging scandal surrounding its flagship K-pop competition show.

“There’s something wrong with MAMAs this year. The energy is not it anymore and everyone feels awkward?” one Twitter user said during the show.

Another tweet echoed the sentiment, “MAMA was really rushed, I thought daesang awards supposed to be announced at the middle of the show or at the end??” seemingly referring to the headline award for album of the year was announced early in the show.

With some viewers going so far as branding this year’s event as “one of the worst” in its history, it’s important to understand the backdrop against which this year’s MAMA took place.

Mnet is facing a credibility crisis over the vote-rigging scandal surrounding its flagship “Produce 101” series. What began as months of speculation saw eight people indicted earlier this week, including Ahn Joon-young, who is a director at the music channel, and the program’s chief producer Kim Yong-beom. Following the news, IZ*ONE and X1, two groups consisting of winners of recent seasons of the show, canceled their planned performances at MAMA this year.

Stricter rules and too many categories

This year’s showgoers faced stricter rules, including a ban on fandom light sticks, which were replaced with an official MAMA alternative given at the event.

Recording devices were also not allowed, including cameras and audio equipment, which meant no viral “fancam” moments.

The show boasted a star-studded lineup, and having over 20 award categories meant fans were able to see many of their favorite acts take home awards.

But some questioned whether the sheer volume of awards categories was justified.

“Definitely not rigged. However, there were too many award categories! MAMA totally gave out awards to those who attended. Like what’s New Artist of the Year and New ‘Asian’ Artist of the Year?! The show itself is Mnet ASIAN award so why add that other category?!” one fan wrote on Twitter.

“How can you give the same award to 10 acts?” another tweet read, apparently referring to the Worldwide Fan’s Choice Top 10 given to BTS, GOT7, Seventeen, TXT, Twice, Ateez, Monsta X, Blackpink, EXO and X1.

The music channel’s year-end awards show takes places in a different location each year, having taken place in multiple countries over the period of a few days for the last two years.

Hong Kong has been one of the popular destinations, but due to recent political tensions there, Mnet turned to Japan for an alternative city.

But the last-minute decision faced backlash at home, as relations between Seoul and Tokyo have worsened over the past year over thorny historical and trade issues.

In Nagoya in particular, an artwork symbolizing Korean victims of Japan’s wartime sex slavery was removed from a recent art fair due to resistance from right-wing groups there.