Tomita made the remarks upon arriving here and noted that he is aware of the “very difficult situation” between the two countries, which have long been plagued by historical and territorial feuds.

The veteran diplomat, noted for his expertise in diplomacy with the United States, replaced Yasumasa Nagamine, who assumed an ambassadorship in Britain last month after more than three years of service in Seoul. 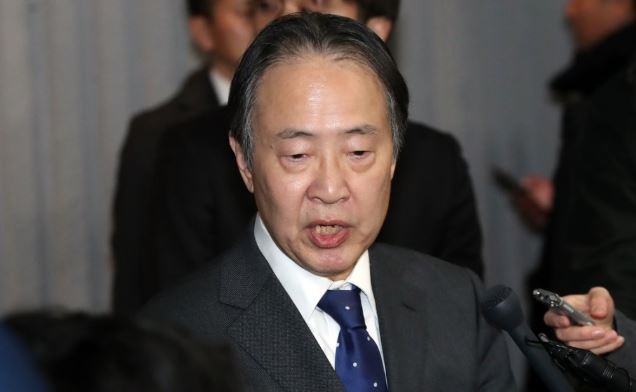 (Yonhap)
“I think my role is to play a bridge-building role by staking out Japan’s positions on piles of various issues if I have to, and by listening carefully to the views from the South Korean side for a resolution,” he told reporters. “I will faithfully play that role,” he added.

Tomita also pointed out the need for the two countries to look ahead for longer-term cooperation.

“Of course, the role as an ambassador is not limited just to handling what happens on a day-to-day basis. We need to look a decade or two decades ahead and seek various exchanges to develop mutual understanding,” the Japanese envoy said.

“I would like to make progress in all areas, including the economy, culture and people-to-people exchanges by marshalling efforts with the relevant people,” he added.

His arrival came as bilateral relations are going through a rough patch in the wake of Tokyo‘s export curbs, which Seoul views as political retaliation for last year’s Korean Supreme Court rulings against Japanese firms over wartime forced labor.

Tensions eased when South Korea decided last month to temporarily suspend its earlier decision to withdraw from a bilateral military information-sharing pact in an apparent move to maintain diplomacy with Tokyo to end the trade conflict.

Since entering foreign service in 1981, Tomita has served in various overseas missions, including in the US, South Korea and Israel. From 2004-2006, Tomita served as a minister in the Japanese Embassy in Seoul.

From 2013-2015, he worked as the foreign ministry‘s director general in charge of North American affairs. During the Group of 20 Summit in June in Osaka, Japan, he served as the government representative for the premier forum. (Yonhap)