Unification Minister Kim Yeon-chul on Monday urged the US and North Korea to hold a working-level meeting before the end of the month, as such a meeting could have far-reaching influence on Pyongyang’s strategic direction for next year.

How North Korea will spend this month will be reflected in regime leader Kim Jong-un’s 2020 New Year’s address, a key indicator of the North’s policies. 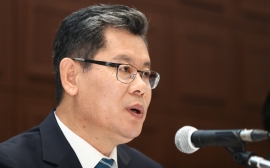 Once a new strategic direction is set by the ruler, it cannot be altered by lower-level officials, given the North’s inflexible structural characteristics.

“It is very important that the North Korea’s nuclear issue enters into the process of resolution through working-level negotiation in December,” said Kim at a forum hosted by the Kwanhoon Club, a group of senior journalists.

Talks between Washington and Pyongyang have been stalled for two months with the year-end deadline set by the North for the US to take a flexible approach toward denuclearization of the Korean Peninsula drawing near.

In mid-November, US Special Representative for North Korea Stephen Biegun called the deadline artificial. “Unfortunately it’s a deadline that they’ve set upon themselves,” he said.

However, the US and South Korea have been working together to bring the North back to the negotiating table. The latest effort was a decision to skip their annual joint air exercise, called Vigilant Ace, which was scheduled to be conducted last month.

“President (Moon Jae-in) made suggestions of pursuing mutual security guarantees and banning hostile acts during the negotiation process. Recently, the US has proposed measures for stable situation management,” Kim said.

Commenting on inter-Korean issues, Kim said that the 2018 agreement reached at a Moon-Kim summit to normalize their joint Kumgangsan tourism project is still valid.

In October, Pyongyang notified Seoul that its leader had ordered the removal of what he called “hideous” South Korean-built facilities from the scenic Kumgangsan mountain resort area, where the two Koreas once operated a tourism program together, saying the North planned to transform the site into a modern international cultural and tourism zone.

The minister said the government is considering removing 340 temporary accommodations made from containers.

“Since (the operations of the tourism program) were suspended, the facilities have been neglected … operators have reached consensus on the need for maintenance work on (the facilities),” he said.

Responding to a news report that the government proposed participation on the development of the Wonsan-Kalma coastal tourist area, North Korea’s landmark tourism construction project, Kim said conditions and environment should be prepared for further discussion.

“What we suggested (to North Korea) was not something in detail. The South and North should meet to discuss detailed plans,” he said.