For decades, big-budget Hollywood blockbusters have been linked to the silver screen.

But the upcoming release of Michael Bay’s “6 Underground” by global streaming giant Netflix is a reminder that the movie distribution industry is changing fast.

“I’ve been lucky enough to work in this business for 25 years now, and I don’t think I’ve worked on a movie of this scale and scope. Just the fact that they’re bringing this to Netflix is a real sign of the times, and how things are changing,” cast member Ryan Reynolds said about the film’s distribution, during a press conference for the film in Seoul on Monday. 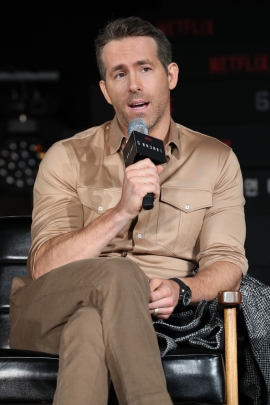 Ryan Reynolds speaks during a press conference for “6 Underground” in Seoul on Monday. (Yonhap)

Directed by Bay, the film was created in hopes of building a new action franchise around Reynolds.

The premise of the movie centers on six individuals from a vigilante squad -- led by “One” (Reynolds) -- who seek to take down criminals after faking their deaths and “becoming ghosts,” erasing their past and changing the outcome of the future in the process.

“With an international cast with Ryan, Melanie, and Adria, it’s a globe-trotting adventure. I think everybody’s going to really respond to it,” said producer Ian Bryce.

Speaking after the Seoul premiere the previous day, the cast members and Bay focused on the intensity of the action in what Reynolds described as “such a muscular film.”

Director Michael Bay (far right) and producer Ian Bryce (second from right) pose for a photo during a press conference in Seoul on Monday with the cast members of “6 Underground.” From left: Ryan Reynolds, Melanie Laurent and Adria Arjona. (Yonhap)

Melanie Laurent noted how the film started off by shooting a car chase scene, one of the most intense moments in the action-packed flick.

“It was maybe the weirdest but also a funny way to meet the cast: stuck in a car, and everything is crazy around you. And you shoot in real streets, which is why that scene feels so amazing and new,” said Laurent, who plays the role of Two. “After that, we felt like everything was going to be like this for five months.”

In an era of computer-generated imagery, Reynolds said the real-life part may be one of the most appealing aspects of the film.

“I’ve always been a huge fan of analog type of visual effect, as opposed to computer-generated visual effects. I loved how so much of what we see in this movie are stunts performed by incredibly talented stunts people, who are some of the most overlooked crew members in this entire industry,” he said.

In addition to Bay’s trademark action and explosions, the cast members also highlighted the film’s characters.

“What drew me specifically was having a strong female character that has a heart, who is not tough but strong. A lot of the times I see in movies females are made to be tough, but this film had the character be strong,” said Adria Arjona about her character Four, who is not big on action but on spirit.

Regarding whether he had any regrets about his new film not being featured on the big screen, Bay said the industry has to adapt to this change.

“I appreciate the movie screen. But our whole movie scene is changed, and we have to get used to it,” he said. “People want to consume things in a new way. And movie-going experience is sort of dying, which is sad, but it is sort of dying.