Parker delivered a keynote speech titled “Korea and New Zealand -- A Modern Partnership for Challenging Times” at the 2019 Year End Grand Hui on Nov 25. A “hui” is a traditional Maori social gathering.

Parker emphasized the relationship between the two countries, particularly on the bilateral trade front, saying bilateral trade has grown 25 percent since the FTA was signed. 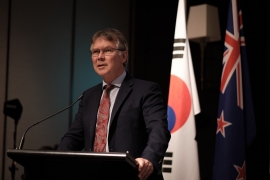 Over 300 dignitaries from the public and private sectors attended this year’s year-end gathering, while New Zealand Trade and Enterprise organized a trade delegation of 12 New Zealand business leaders.

During his trip to Seoul, Parker presented a letter of intent to Korea’s SEA LH2 Consortium on behalf of the New Zealand government and a consortium of New Zealand energy companies to kick-start trade in the field of green hydrogen, the Kiwi Chamber said.

“Minister Parker’s visit to Korea along with the trade delegation is a reflection of the thriving growth and business partnerships that exist between our two countries,” New Zealand Ambassador to Korea Philip Turner said at the event.

“It provides a spur for further growth and collaboration and contributes to our ongoing efforts to increase the profile of New Zealand’s activities here in Korea.”