The consumer price index stood at 104.87 in November, compared with 104.71 for the same month last year, Statistics Korea said in a statement.

The November reading was followed by zero growth in October and the first negative inflation rate in September that sparked fears of deflation. 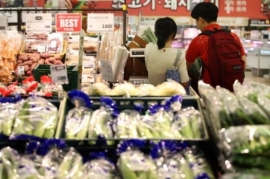 However, the November inflation rate was below market expectations. A survey of 10 financial institutions by Yonhap Infomax, the financial news arm of Yonhap New Agency, had expected consumer prices to rise 0.48 percent in November.

The country's inflation fell 0.6 percent on-month last month, due to declines in agricultural prices and service charges, Statistics Korea said in a statement.

Lee anticipated that South Korea's annual inflation may not fall below zero again in the coming months.

In a separate statement, the Ministry of Economy and Finance said the annual inflation rate may hover around zero to 1 percent for the next few months.

The recent trend of weaker consumer prices came after a base effect from last year's surge in prices of farm products and oils, the ministry said, adding that such base effect has been eased.

"The government will cope with the impact of consumer prices on the economy by closely monitoring their upward and downward risk factors," the ministry said.

Slowing inflation may persuade the Bank of Korea to hold off raising interest rates.

Exports fell for a 12th consecutive month in November, and inflation has stayed far below the BOK's target of 2 percent.

Last week, the BOK, which cut its key interest rate two times this year, kept its rate at a record low of 1.25 percent.

The BOK also slashed its growth forecast for this year from 2.2 percent to 2 percent, as the nation's economy is struggling with the impact of a US-China trade war. (Yonhap)