A group of middle school students rescued a dog from a dog meat dealer, a dog rescue group said Saturday. 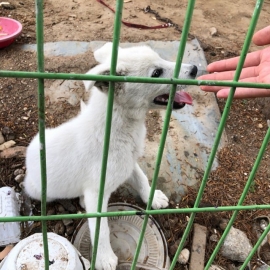 Brandnew before he was rescued (Save Korean Dogs)

According to the group, the children found the dog bound with a short rope inside a metal cage on the street in front of their school. The dog was being kept in poor conditions, being threatened with sticks by the woman and given only food scraps to eat. Upon hearing that the dog would be sold for meat, the kids collected what little money they had and paid about 30,000 won ($25.42) to rescue the dog.

The six cared for the dog -- now named Brandnew -- on the roof of one of their homes, and entrusted him to the animal protection group Saturday in hopes of providing a more suitable environment. 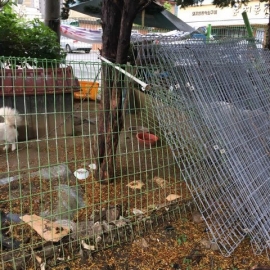 This is the second dog the group has taken in under similar circumstances after a rescue by students, said a representative of Save Korean Dogs.

According to the rescue, although the local government is making ongoing efforts to root out the dog meat business, which was once widespread in the city, dogs like Brandnew are still being slaughtered and sold for meat. In November 2018, Seongnam demolished one of the nation’s biggest dog slaughterhouse complexes.

“I hope more children can become aware and take action in fighting against dog meat consumption and take part in advocating for animal rights,” the Save Korean Dogs representative said.

Save Korean Dogs is a small activist group based in Gimpo, Gyeonggi Province, which raises international awareness about South Korea’s dog meat trade, rescuing dogs and finding homes for them both inside the country and overseas.