Korea is in the midst of the kimchi-making season.

In early winter, when temperatures just start to fall below zero, Koreans go through the annual ritual of gimjang -- making large quantities of the spicy, fermented cabbage dish to last the coming year. 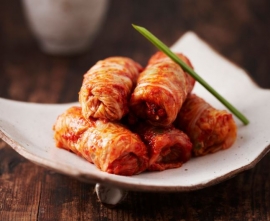 Kimchi is not just spicy cabbage. There are hundreds of varieties of kimchi in Korea made from radishes, cucumbers or scallions. (World Institute of Kimchi)

It is such an important family event that “have you done this year’s gimjang already?” becomes a typical icebreaker among housewives during this time of year.

Added to UNESCO’s list of intangible cultural heritage in 2013, the kimchi-making custom is peculiar in more than one aspect.

Above all, gimjang typically involves multiple families, friends or even an entire neighborhood. They buy cabbage, red pepper powder and other ingredients in bulk, make kimchi together and share it. Economies of scale may apply here, but this communal aspect of kimchi making is primarily what makes kimchi much more than a dish. It is a part of cultural heritage and identity that has been passed down through generations, with its recipes, special ingredients and seasoning varying among families, communities and regions. 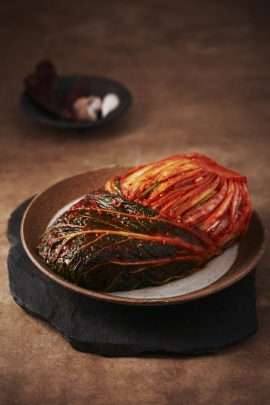 At its most basic, kimchi is a dish of pickled cabbage seasoned with lots of garlic, ginger and red chili powder. From this simple concoction comes a product that has a fresh, crisp and intriguingly carbonated taste at first before becoming sourer and more pungent as it ages.

Kimchi today enjoys an elevated profile as a “superfood” after a series of studies showed its health benefits. 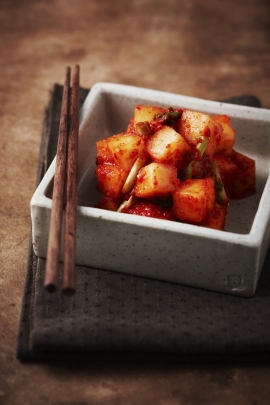 Packed with vitamins, minerals, fiber and lactic acid bacteria, kimchi is believed to be effective at warding off cancer and obesity and reducing cholesterol. It is also full of health-improving antioxidants and anti-aging properties. Recent research has suggested kimchi could even help with growth and thickening of the hair. 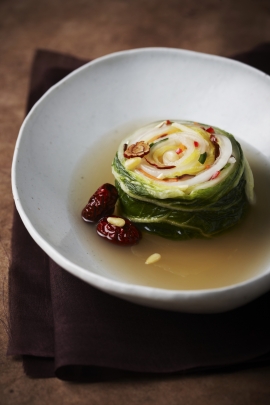 The southern city of Gwangju has a kimchi town. There, the World Institute of Kimchi leads research on the nation’s beloved side dish. Tasked by the government with the research and promotion of kimchi, the institution’s researchers work to establish a scientific understanding of kimchi -- what makes it tasty and healthy, while providing technological support for the advance of the kimchi industry.