South Korea’s obsession with a penguin character is nothing new, with Pororo the “little penguin” having charmed kids with his orange goggles and innocence for more than a decade.

However, Pengsoo -- a penguin character that bears a striking resemblance to Pororo, but armed with a blunter persona -- has gained cross-generational popularity in recent months, even nudging investors to purchase related stocks.

Digital education contents producer Uangel -- which signed a memorandum of understanding in 2017 with Educational Broadcasting System, a public broadcaster and producer of Pengsoo’s television show Giant Peng TV -- saw its shares gain more than 40 percent as of Friday, compared with its average trading price July. Uangel traded at 5,520won ($4.73) on the main bourse Kospi on Friday, compared with 3,670 won on July 17.

Online retailer Yes24 saw its stocks gain more than 10 percent this month compared to its average trading price of around 6,000 won in September. It traded at 6,550 won on Friday after hitting a 52-week high of 7,400 won on Nov. 11. Yes24 has been handing out Pengsoo merchandises to its customers purchasing textbooks published by EBS. 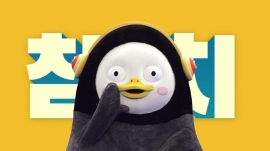 While investors are avidly seeking stocks that could be buoyed by Pengsoo’s popularity, there are some unlisted companies that have been actively producing related merchandises or other products.

This is due to the fact that Pengsoo is a relatively new character, having debuted in early 2019 and has garnered attention recently after the launch of its YouTube channel that shares the same name with its TV show.

However, analysts are anticipating Pengsoo’s popularity will equal that of Pororo or Baby Shark, which rose to international fame and boosted the stocks of its producers and merchandisers.

The character’s emoticons were released on KakaoTalk, the nation’s No. 1 chat app in terms of users, on Wednesday. Kakao emoticons are often seen as a barometer of popularity here.

“It is likely that investors will continue seeking character-related stocks through Pengsoo, like they did with Pororo,” local brokerage Meritz Securities analyst Ha In-hwan said.

“The expectations will likely rise after related merchandises are released,” he added.

Unlike Pororo which has gained the nickname “children’s president” in Korea through his positive attitude, Pengsoo is almost an antithesis of the character born in the early 2000s. 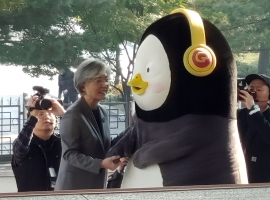 Pengsoo’s character -- which is an eccentric combination of innocence and bluntness that is perfected with its lack of change in facial expression -- resonates not only with children, but millennials and even generations before them with his nonchalant and blunt manner. Pengsoo is also known for a good rapping and beatboxing skills and conversation with a very specific accent in an almost-coarse voice.

It first received positive attention from adults after a YouTube video was uploaded by EBS in September, parodying sports competitions by featuring characters from its most beloved television shows. While other characters displayed traditional ways of respect to those who debuted before them, Pengsoo spoke his mind freely and bluntly, which viewers interpreted as “confidence.”

Pengsoo also maintained an indifferent attitude in front of both his boss EBS Chairman Kim Myung-joong and Foreign Minister Kang Kyung-wha in a recent meetings, even inviting Kim to have a meal (Pengsoo refuses to be identified as a specific gender, with the character responding that it “has no such thing,” when questioned)

In one of the videos featuring Pengsoo, a comment said, “Pengsoo is loved by both adults and children because it values honesty and caring for others instead of merely showing respect and courtesy on the outside.”

The character, who according to EBS has swum all the way from the Antarctic Ocean to Korea eyeing Pororo’s success story, has amassed nearly 600,000 subscribers since the launch of its YouTube channel in March.

The true identity of the talent playing Pengsoo remains unknown.