TOKYO -- South Korea will send out a new-looking batting lineup in an important Olympic qualifying game against Mexico later Friday in Tokyo.

South Korean manager Kim Kyung-moon announced changes ahead of the Super Round game at the World Baseball Softball Confederation Premier12 at Tokyo Dome in Tokyo.

The Premier12 is also an Olympic qualifying tournament for Asian/Oceanian and American countries. South Korea can clinch its spot in the 2020 Tokyo Olympics with a win over Mexico. A loss would further complicate the picture, and South Korea will face a virtual must-win on Saturday against Japan.

And with South Korea coming off a 7-0 loss to Chinese Taipei Tuesday, Kim said it was "time to make some changes." 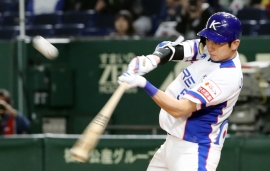 Lee Jung-hoo, who leads the tournament with a .471 batting average, will move up from No. 3 spot to take the leadoff role from Park Min-woo, who will move down to No. 9.

And slugger Kim Jae-hwan, who has the most RBIs among South Koreans with six, will leave his traditional No. 5 spot to become the new No. 3 hitter. And captain Kim Hyun-soo will climb from No. 7 to No. 5 in the batting order.

Veteran third baseman Choi Jeong, who'd been nursing a minor leg injury, will make his first start of the tournament and bat seventh.

"With Jae-hwan batting third, we're going to have someone with power and an ability to drive in runs near the top," the manager Kim noted. "We had some success with our previous lineup, but we felt we had to go in a new direction."

Kim Kyung-moon has been long known for his fierce loyalty to his players. And amid the shakeup, the one constant will be cleanup Park Byung-ho, who's batting just 3-for-18 with just one RBI and no home run. (Yonhap)