NK says it will remove S. Korean facilities from Kumgangsan

Pyongyang sent an ultimatum to Seoul on Monday, warning that it will unilaterally remove all South Korean-built facilities from the Kumgangsan resort unless Seoul tears them down on its own, North Korean state media said Friday.

Dismissing South Korea’s calls for talks to salvage the long-suspended tourism venture at the mountain resort, the North said it would develop the resort in its own way, and that there was no room for the South to meddle. 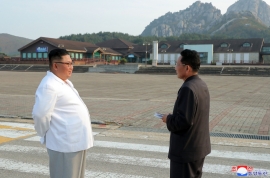 “We sent an ultimatum on Nov. 11 that if South Korean authorities continue to stick to useless demands, we will regard it as giving up on the removal of facilities, and will unilaterally take stern measures to tear them down,” the Korean Central News Agency said, adding that the South has kept silent about the matter.

“Kumgangsan is clearly not a shared property of the North and South, and neither is it a symbol of inter-Korean reconciliation. We will develop it into a global cultural and tourist area in our own way as its owner in front of our people and our next generations. … There is no room for the South to meddle in.”

Mentioning that the North had clearly informed the South on Oct. 29 and Nov. 6 of its refusal to engage in face-to-face talks, the KCNA said it was “pathetic” and “brazen” of the South to try and “cut in on the tour program after neglecting the facilities for some 10 years for fear of the US.”

Seoul has said it will consider “creative solutions” including allowing individual trips to the Kumgangsan resort if the North can guarantee the safety of South Korean visitors.

“With our timetable set, we can no longer waste time exchanging notices,” the KCNA said, adding that it was doing the South a favor by allowing it to remove its own facilities for old times’ sake when the North could legally take care of them.