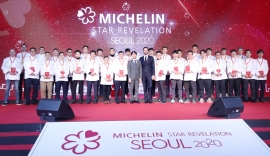 Chefs who received one or more stars in the Michelin Guide Seoul 2020 pose for photos at an event Thursday at Vista Walkerhill Seoul, Gwangjin-gu, eastern Seoul. (Yonhap)

A total of 31 restaurants received at least one star this year.

There was no new addition to the three-star list. However, two new restaurants made it to the two-star list: innovative cuisine restaurant Mosu, led by chef Ahn Sung-jae, and contemporary French restaurant L’Impression, led by chef Seo Hyeon-min.

“Korean cuisine is carefully balanced between ancestral tradition and innovation. All chefs are interpreting the foundation of Korean cuisine in their own way,” Gwendal Poullennec, international director of the Michelin Guides, said prior to revealing the list.

“This creative mix between tradition and innovation seems to be the recipe of creation for wonders here in Korea,” he said.

Gwendal Poullennec, international director of Michelin Guides, speaks during a press event for the release of the Michelin Guide Seoul 2020 on Thursday at Vista Walkerhill Seoul, Gwangjin-gu, eastern Seoul. (Yonhap)

In addition to the Michelin-starred restaurants, four new additions were made to the Bib Gourmand list, which comprises 60 restaurants recognized for serving quality food at reasonable prices of under 35,000 won.

Meanwhile, allegations have been raised that some of the starred restaurants signed a consulting deal with a figure who had worked as a local coordinator for Michelin Guide inspectors. Furthermore, those restaurants may allegedly have covered the expenses of inspectors’ visits to Seoul.

An owner of a local restaurant has raised the suspicions, saying her restaurant was excluded from the Michelin Guide after she declined to sign with the consultant.

Michelin Korea reportedly denied the suspicions Tuesday in a phone interview with a newspaper, saying the firm was not acquainted with the figure. It added that an internal investigation was conducted after similar suspicions were raised last year but nothing was found.

Michelin Korea did not respond to questions about the suspicions at the event on Thursday.

“We developed a unique methodology in deep rooted independence. We do not trust anybody except inspectors,” Poullennec said in his introductory speech, possibly referring to the controversy.

There was no official Q&A session, but after the press event, Poullennec denied Michelin’s connections with the figure.

“Michelin evaluation is made by multiple inspectors,” he said to the press. “There is no need for restaurants to cover our expenses. We always pay for the meals.”