Designated hitter Kim Jae-hwan launched a three-run home run in the first for South Korea, who added a couple of insurance runs in the seventh to claim its opening game of the Super Round at the World Baseball Softball Confederation Premier12 at Tokyo Dome in the Japanese capital. 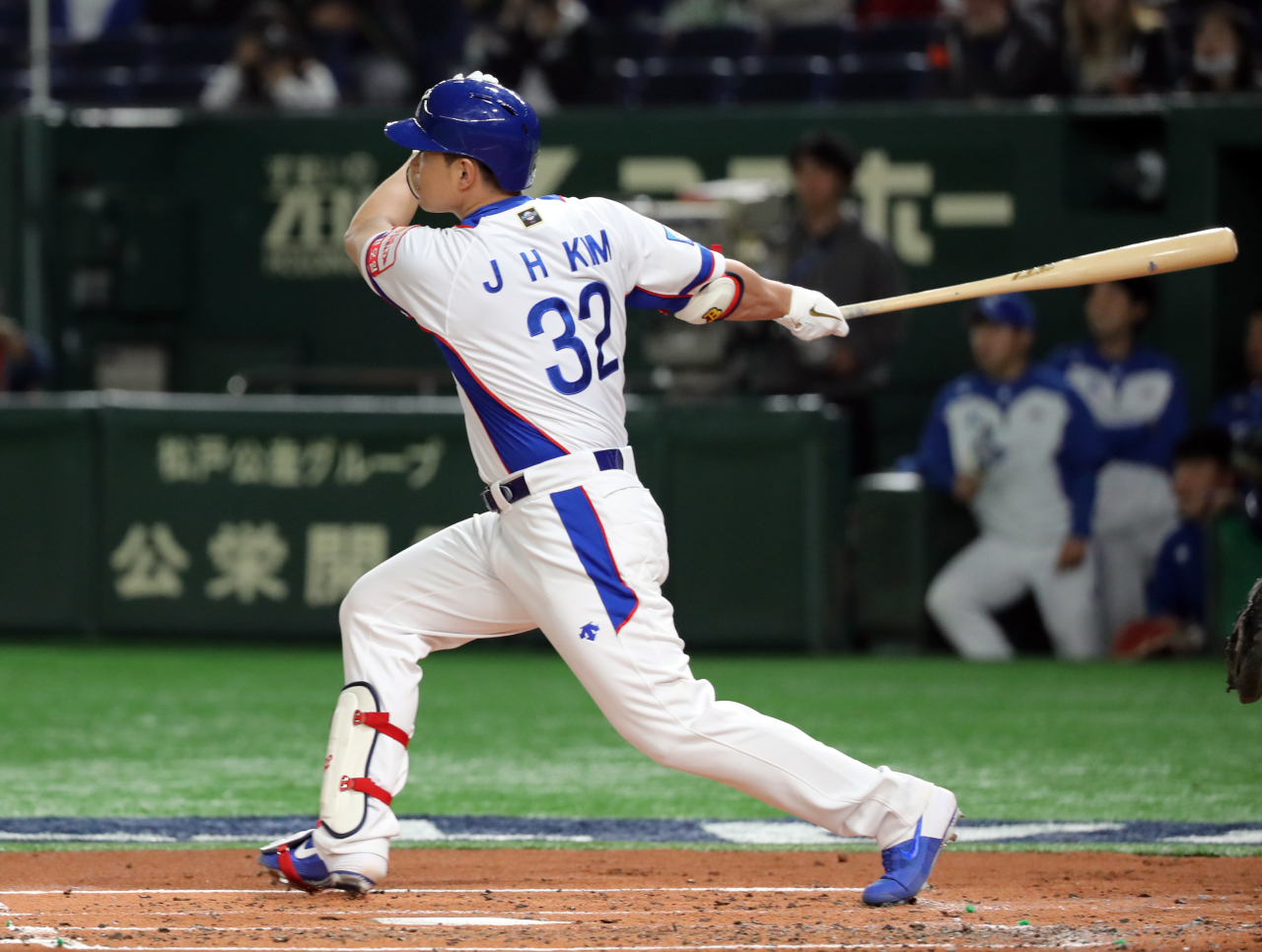 Designated hitter Kim Jae-hwan (Yonhap)
South Korean starter Yang Hyeon-jong wiggled out of a bases-loaded jam in the first inning while holding the US to a run despite giving up 10 hits in 5 2/3 innings. Three relievers held the Americans to three hits the rest of the game.

South Korea will next face Chinese Taipei on Tuesday at ZOZO Marine Stadium in Chiba, just east of Tokyo.

The Premier12 is an Olympic qualifying tournament for Asia/Oceania and the Americas. Counting results from the first round, South Korea improved to 4-0 after Monday's win, while Chinese Taipei lost to Mexico earlier Monday to drop to 0-2.

Yang labored through the first frame, needing 28 pitches to work around the bases-loaded jam.

With one out, Yang gave up a double, a walk and a single to put three Americans aboard. The left-hander settled down in time to strike out Jake Cronenworth and Brent Rooker to escape the inning unscathed.

South Korea made the US pay dearly for the squandered opportunity in the bottom first. 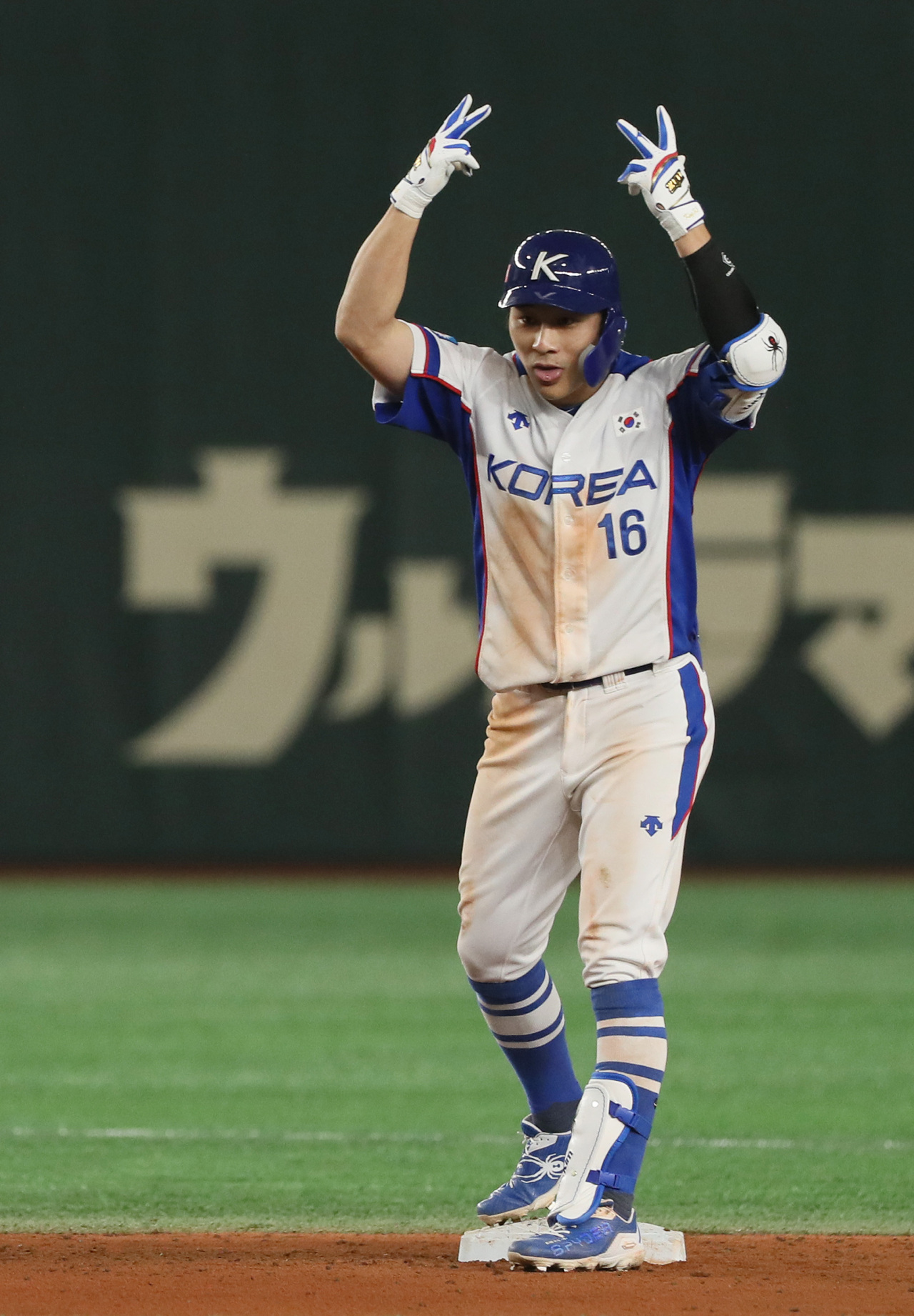 Kim Ha-seong (Yonhap)
After one out, Kim Ha-seong singled and stole second. He advanced to third on Lee Jung-hoo's single.

And with the men at the corners, Kim jumped on a 1-0 fastball from starter Cody Ponce and sent a line drive shot over the right field wall for a 3-0 South Korean lead.

Yang kept allowing hard contact in the second inning but managed keep the Americans off the board. Two straight two-out singles, combined with a throwing error by shortstop Kim Ha-seong, put men at second and third for Alec Bohm, who grounded out to short. 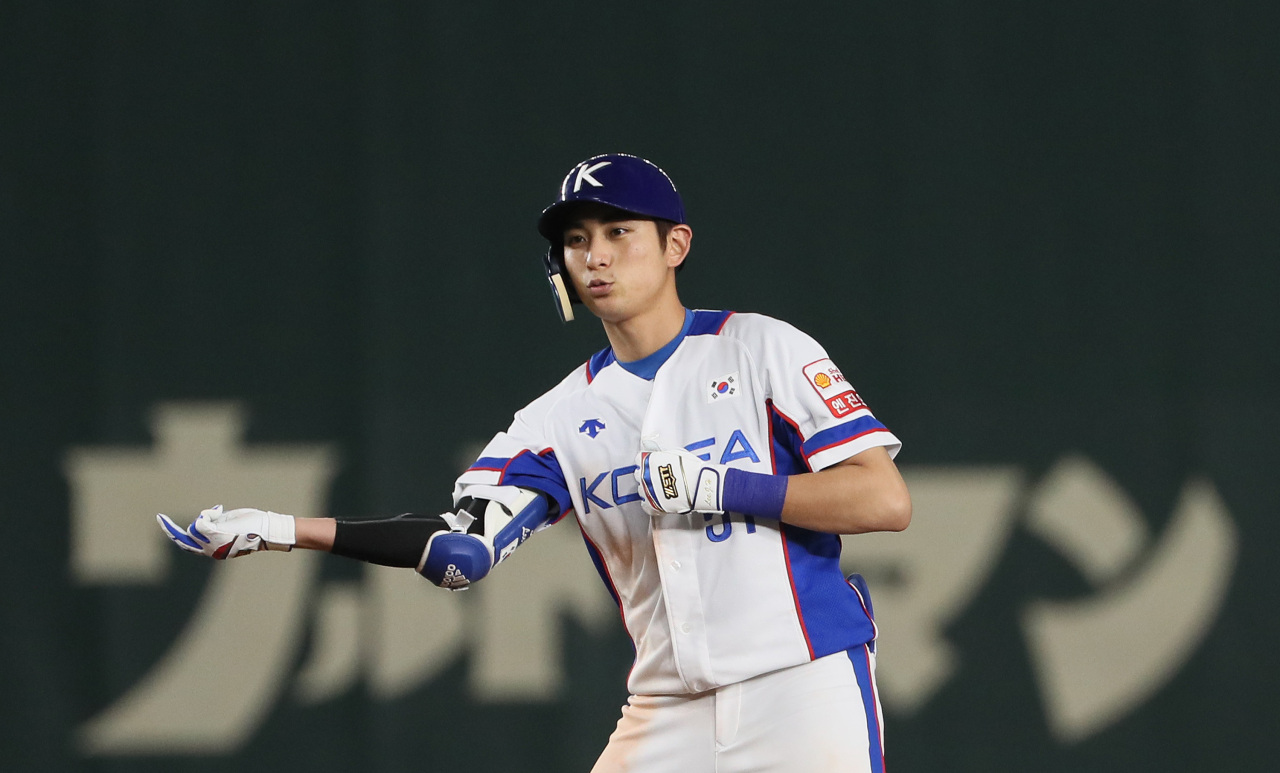 Lee Jung-hoo (Yonhap)
The US cut the lead to 3-1 in the sixth with Brent Rooker's solo home run off Yang, but, as was the theme all night, stranded runners at second and third against reliever Lee Young-ha, who struck out Alec Bohm to end the threat.

After missing a couple of scoring chances, South Korea eked out two runs against the US bullpen with two outs in the seventh.

Park Min-woo reached with a single and scored to make it 4-1 on Kim Ha-seong's fortuitous double to center field. 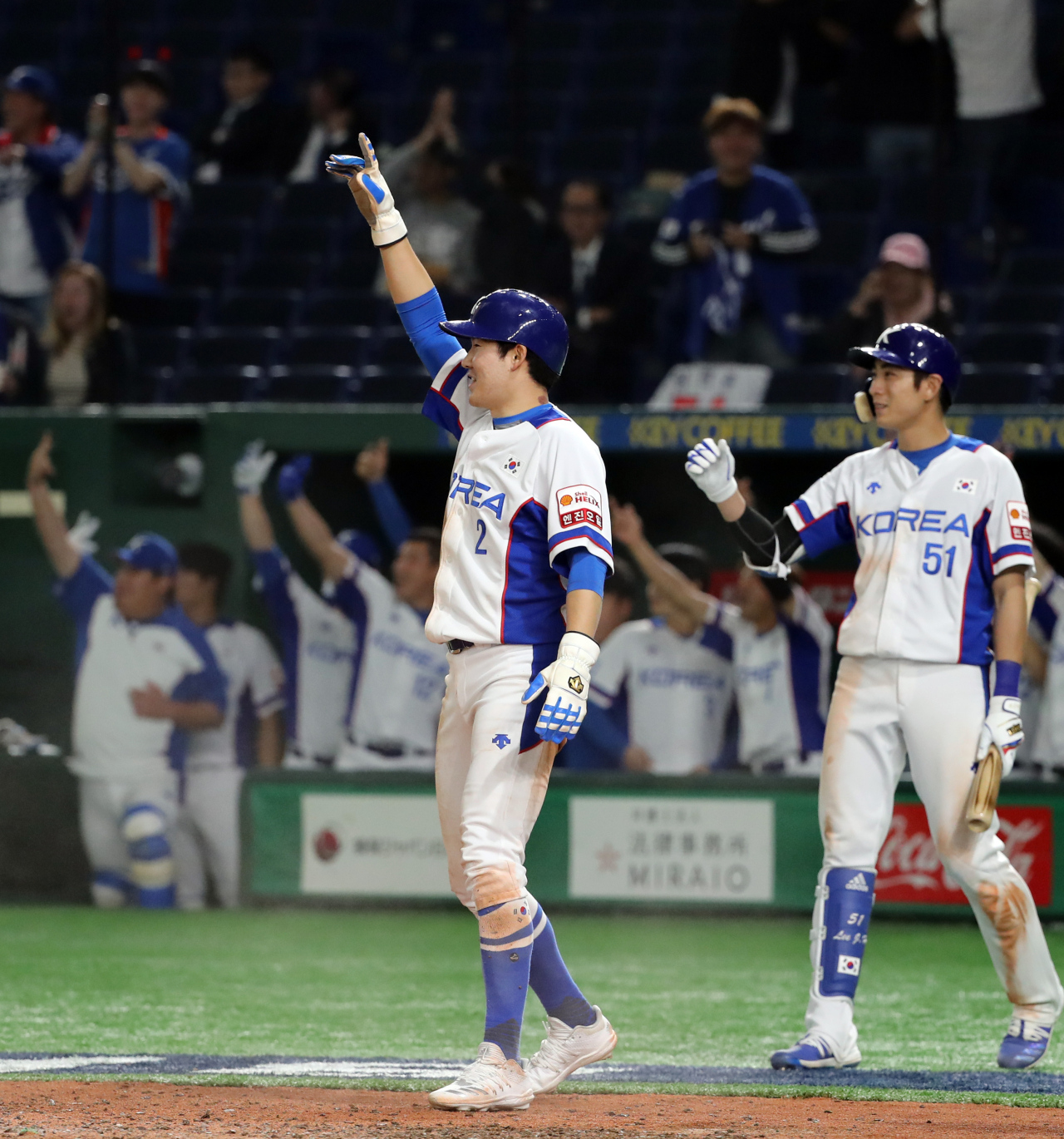 Park Min-woo (Yonhap)
On Kim's shallow fly, center fielder Drew Waters misjudged the flight of the ball, moving back a couple of steps before sprinting forward in vain. The ball went off Waters' glove, as Park, who ran on contact with two outs, scored easily from first.

Lee Jung-hoo followed up with a double to left field to open up a 5-1 lead for South Korea.

The US tried to respond in the top eighth, but left fielder Kim Hyun-soo made a couple of key defensive plays. First, he caught a hard line drive by C.J. Connor, and nearly doubled off Daulton Varsho at second base. Varsho sprained his ankle while sliding back to the bag, and was lifted for pinch runner Xavier Edwards. 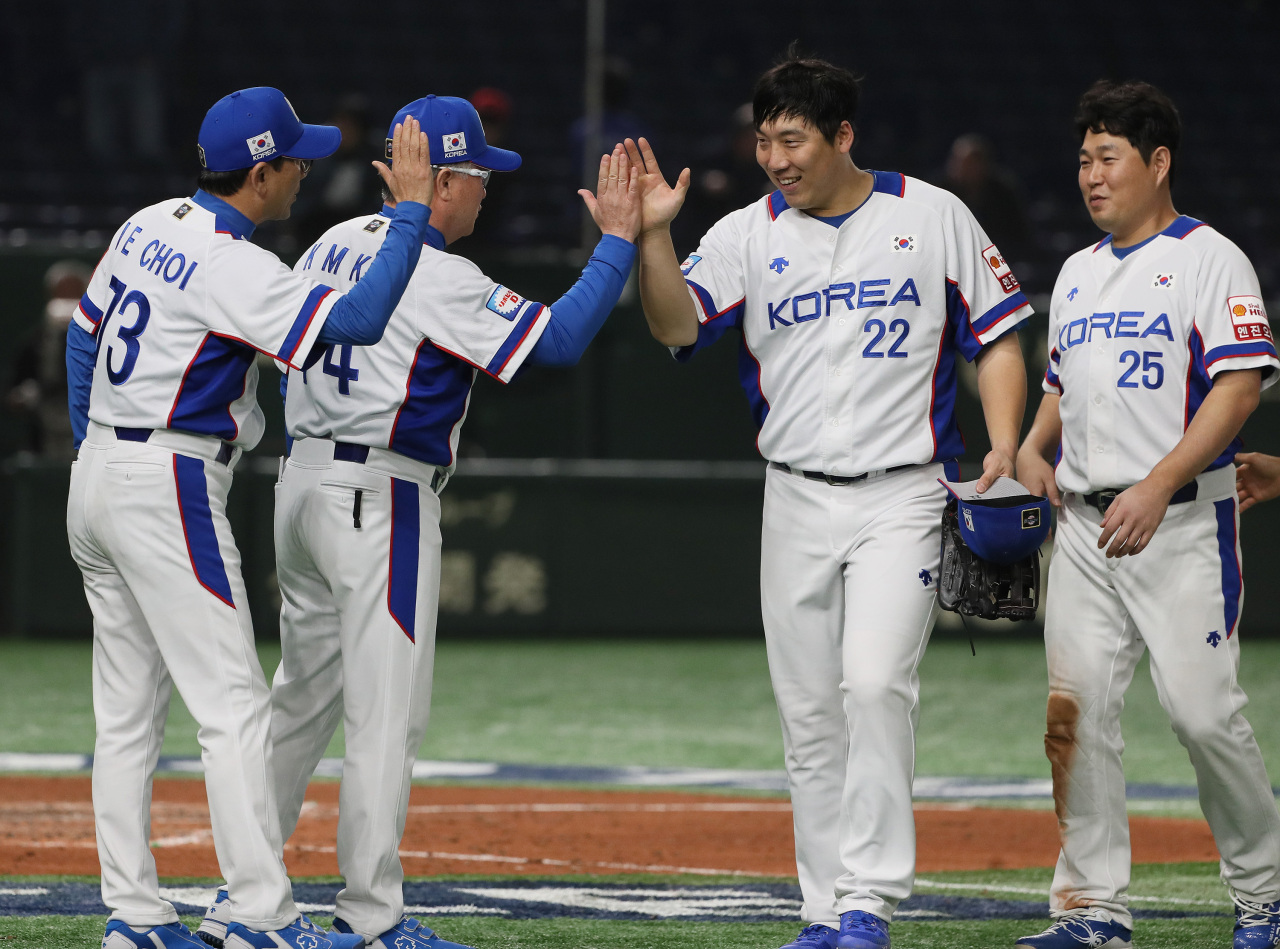 (Yonhap)
Jo Adell followed up with a single to left, and Kim gunned down Edwards at the plate -- a call that stood after a video review requested by the US.