TOKYO -- South Korea's quest for a spot in the 2020 Olympic baseball tournament will begin in earnest here on Monday against a familiar foe.

South Korea will face the United States at Tokyo Dome at 7 p.m. Monday to begin the Super Round at the World Baseball Softball Confederation Premier12. It'll be a rematch of the inaugural Premier12 final from 2015. 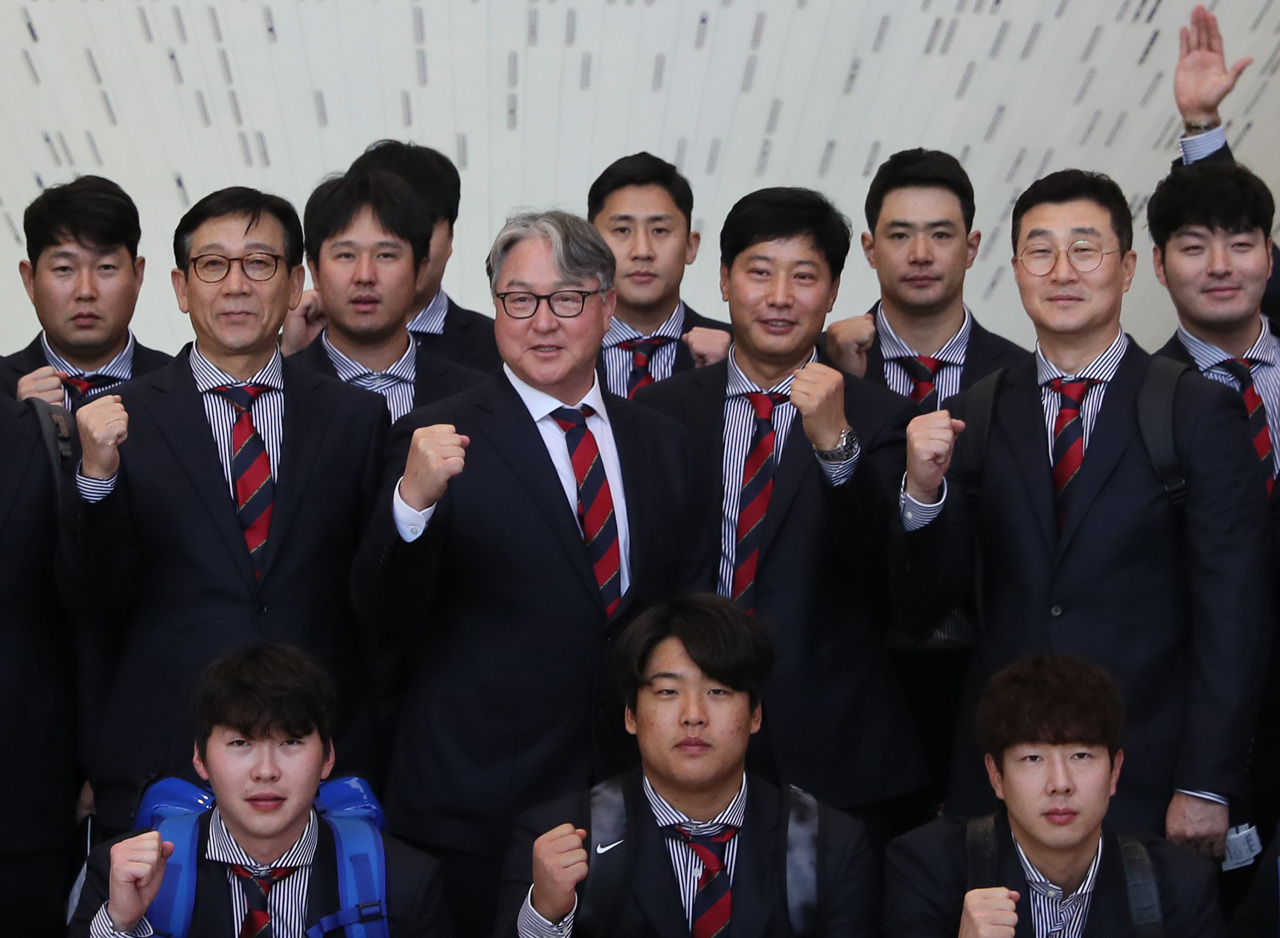 (Yonhap)
The Premier12 is also an Olympic qualifying tournament for the Americas and Asia/Oceania. The top dozen teams on the WBSC rankings were divided into three groups of four, and the top two nations from each reached the Super Round, which will be played in Tokyo and neighboring city Chiba.

South Korea cleared the first hurdle by winning Group C with a perfect 3-0 record, and the United States finished second in Group A with a 2-1 record. Mexico, Japan, Chinese Taipei and Australia are other Super Round contestants.

In the Super Round, teams will first face teams that they didn't play in the group phase. The top two nations after four games each will reach the championship final, scheduled for next Sunday.

Only the best team from the Americas and the top nation from Asia/Oceania will qualify for the 2020 Tokyo Olympics.

Japan has automatically qualified for the Olympics as the host country, and this means South Korea will only have to finish ahead of Chinese Taipei and Australia.

The 2015 Premier12 final between South Korea and the United States was also played at Tokyo Dome. South Korea prevailed 8-0 then, and there's far more at stake for both teams now as they're trying to qualify for the Olympics. 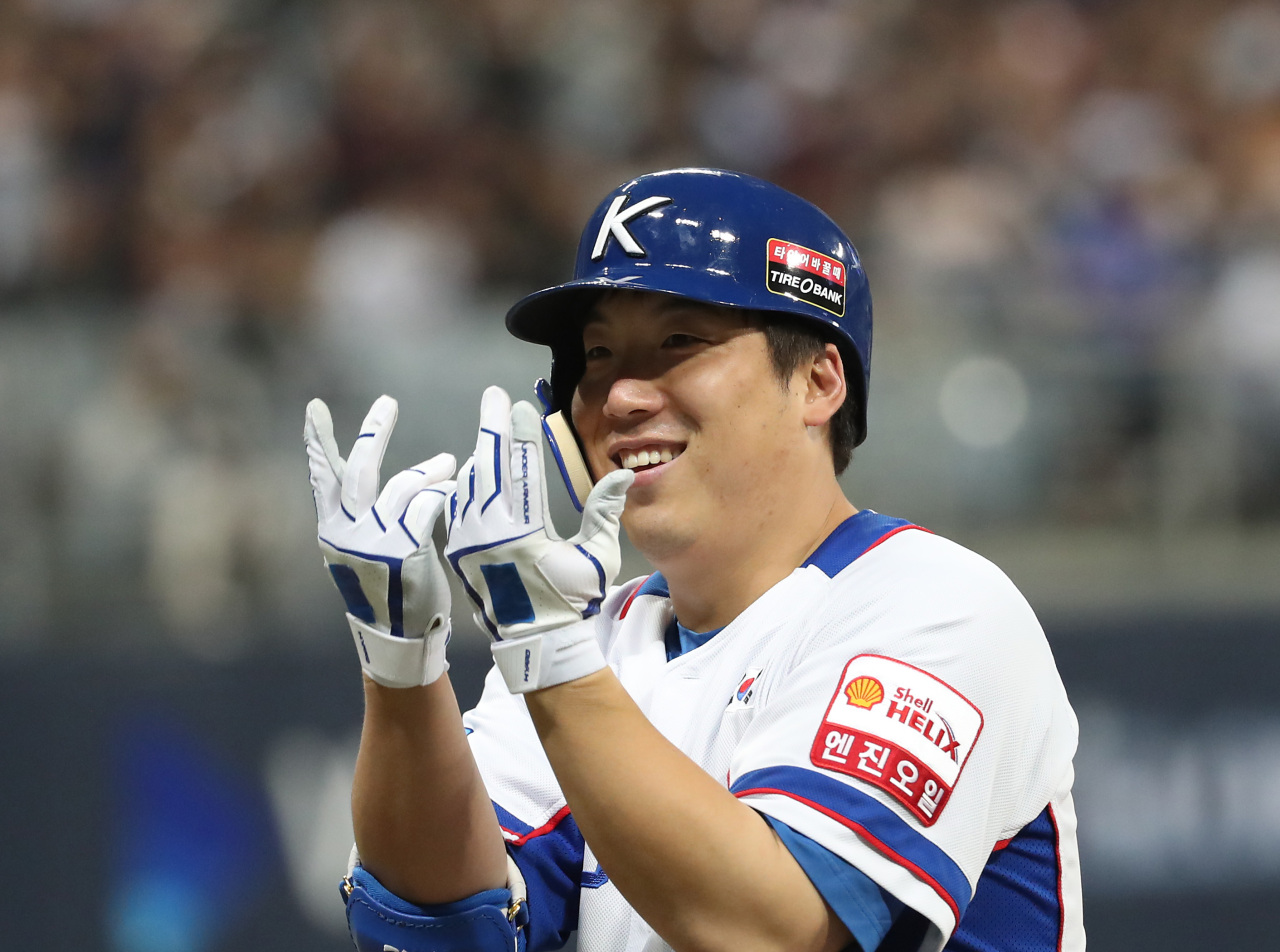 Captain Kim Hyun-soo (Yonhap)
South Korea has brought back some of the key members of that 2015 team. Captain Kim Hyun-soo, the 2015 Premier12 MVP, batted 3-for-5 in the final. Cleanup hitter Park Byung-ho blasted a three-run home run in that game.

On Monday, it'll be a different lefty taking the mound for South Korea.

Yang, the reigning Korea Baseball Organization ERA champion, pitched six scoreless innings of one-hit ball against Australia in the Group C opener in Seoul on Wednesday. Yang struck out 10 and didn't walk anyone. He's one of two pitchers to strike out at least 10 batters in the group phase.

South Korea as a team gave up just one run in three Group C games while scoring 15.

The United States, on the other hand, put up 21 runs on the board and allowed 16. The powerful lineup launched 10 home runs, while no South Korean hitter went deep in the earlier round.

Erik Kratz, a veteran catcher with 316 major league games to his credit, had two of those home runs and went 5-for-8 at the plate with three RBIs and four runs scored.

Jo Adell, a highly-touted, 20-year-old prospect in the Los Angeles Angels system, batted 4-for-13 with a home run in the first round.

On the mound, Pittsburgh Pirates' minor league right-hander Cody Ponce pitched five shutout innings against the Netherlands in Group A on Nov. 2, the best performance by a US starter in the first round. (Yonhap)