Ten days after an ambulance chopper crashed into the East Sea, the authorities continued operations to find four missing persons on Saturday, with Prime Minister Lee Nak-yon vowing to do everything to the end.

On Oct. 31, the ambulance helicopter, carrying seven people, crashed into the sea shortly after taking off from South Korea's easternmost islets of Dokdo. The chopper, owned by the National 119 Rescue Headquarters, was on a mission to save a patient from a fishing boat. 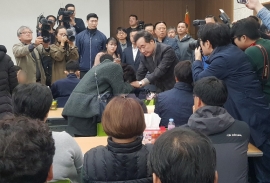 Prime Minister Lee Nak-yon holds hands of a family member of a missing person who was on a rescue helicopter that crashed into the sea off Dokdo last month, during his meeting with other familiy members at a fire station in the southeastern city of Daegu, Saturday. (Yonhap)

So far, three bodies have been retrieved, with the last one being found on Tuesday, and little progress has since been made.

In order to find the four others, 14 naval ships and six aircraft as well as 37 divers were mobilized on Saturday, with more vessels to arrive at the scene later in the day as the authorities seek to expand the scope of their operations.

Some debris of the helicopter were found on Friday, according to officials.

Earlier in the day, the prime minister visited a fire station in the southeastern city of Daegu and met with family members of the missing people, who demanded the mobilization of all equipment and personnel available.

"My daughter had done everything to serve the country. Please let me have her back, even her body," said the mother of Park Dan-bi, an ambulance officer aboard the ill-fated chopper.

"We will never give up and will do everything possible to the end to find them all," Lee said, adding that the government is to send to the accident site civilian divers who are familiar with environments of the region.

The crashed chopper, an EC-225 Super Puma long-range passenger transport helicopter built by France-based Airbus Helicopters, formerly Eurocopter, was imported to South Korea in 2016. The authorities are working to find the cause of the accident.