N. Korean official calls on US to meet year-end deadline before 'window closes'

A North Korean foreign ministry official has urged the United States to make a "forward-looking" decision within this year, saying the "window for opportunity is closing every day."

The remarks by Jo Chol-su, director-general of the North American department at the North's foreign ministry, at the 2019 Moscow Nonproliferation Conference on Friday are the latest in a series of attempts by Pyongyang to pressure Washington to come up with new proposals in their denuclearization talks by setting the deadline as the end of this year. 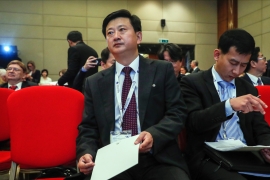 "We have given considerably much time to the US, and we will wait for some results until the end of this year," Cho said in an answer to a participant's question during a session of the conference.

"Though we expect everything to go into a positive direction, I want to say that the window for opportunity is closing bit by bit every day," he added.

Claiming that the North has done its best to show a willingness for progress, the official said that a response "on the same level"from the US is required to have trust as this issue "cannot be resolved unilaterally."

"We maintain our position that the issue should be resolved through dialogue and negotiations. But the most important point is that (such efforts) should bear fruits," Cho said, stressing that it is ready to meet anytime but that "dialogue for the sake of dialogue is meaningless."

Last month, in Stockholm, Sweden, the US and North Korea held the first formal negotiations on the North's nuclear weapons programs since the breakdown of the summit between US President Donald Trump and North Korean leader Kim Jong-un in Hanoi in February.

But no tangible progress was made due to gaps over the extent of Pyongyang's denuclearization and Washington's sanctions relief. (Yonhap)