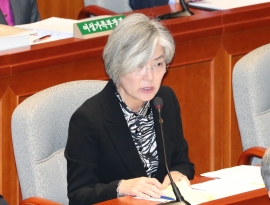 During the talks with Cedric O, Kang noted that bilateral cooperation has deepened in various areas since South Korean President Moon Jae-in's visit to France in October last year, the ministry said in a press release.

She also expressed gratitude to the French secretary for his efforts to enhance the relationship between the two countries.

O pledged to make efforts to ensure smooth bilateral communication and called for joint efforts to expand practical cooperation related to new technologies, such as artificial intelligence, according to the press release.

Kang also used the meeting to call for France's continued support for Seoul's ongoing efforts for denuclearization and a lasting peace on the Korean Peninsula. (Yonhap)