A few years ago, Korea’s cartoon industry saw arguably its biggest triumph with “Pororo the Little Penguin.” The cute, innocent penguin character was a massive hit across the nation and in other countries. 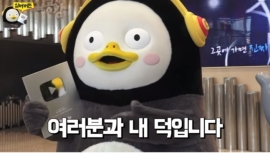 Pengsoo debuted six months ago under Educational Broadcasting System, a public broadcasting station that offers educational services. The character claims to have swum all the way from the Antarctic Ocean to Korea after seeing Pororo making its success.

Though the character has its own Friday night TV show, its main platform is YouTube. Its channel Giant Peng TV has 400,000 subscribers.

Although Pengsoo originates from an education service provider, the character is far from being educational. It says that it prefers money instead of affection. Its activities include attempting to steal a luxury bag at a fan event and lying down while other characters are participating in a sports competition.

Social media has been abuzz with posts about encounters with Pengsoo. On Thursday, the character visited the Ministry of Foreign Affairs to be featured in a promotional video for the upcoming ASEAN-South Korea summit. 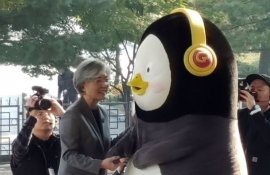 Pengsoo has also made its way onto other TV programs, such as MBC’s “My Little Television” and SBS’ “Law of the Jungle.” The actor inside the costume has not been revealed yet. EBS has been hiding the actor’s identity, saying that “Pengsoo is really just a penguin.”