The bank’s Danang office had earlier obtained its business license in September and kicked off business on Oct. 25, becoming Woori’s tenth bank office in Vietnam and the first in the central region. 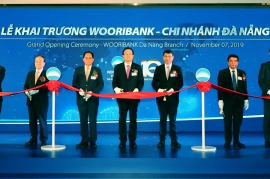 It was also the first foreign bank to kick off since the State Bank of Vietnam reinforced regulations for foreign banks in May this year, according to Woori officials.

The midterm goal of Woori Bank Vietnam is to launch its mobile banking service within the first half of next year and to further advance its artificial intelligence-based mobile credit loan service.

It will also establish new offices in Bien Hoa, Saigon and Vinh Phuc by the end of this year, seeking to expand the number of branches to 20 or more by 2021.