President Moon Jae-in on Friday stressed the importance of ridding the nation of corrupt practices, listing education and prosecution reform as two of the most urgent issues.

Speaking at a meeting of the anti-corruption policy committee, Moon said the labor market and the practice of giving preferential treatment to retired public officials need urgent reform. 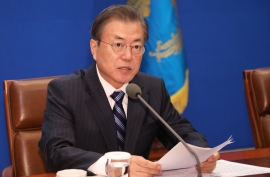 “Anti-corruption reform and (building a) fair society is a calling of our administration,” Moon said.

Listing changes made under his administration to improve transparency, Moon said significant improvements have been made but major tasks remain, such as the establishment of an independent investigative body for ranking government officials.

He added that the committee’s establishment symbolizes the administration’s determination to correct wrongs and to enable “the value of fairness” to become deeply rooted in society.

Saying it is significant that the committee is discussing privileges given to former officials, Moon called on officials to consider ridding the country of such practices as their duty.

Moving on to education, Moon said, “Unfairness and illegal (practices) in the private education sector must be corrected.” He called on concerned government organizations to conduct a special audit on related matters.

The president also highlighted the need to make the job market fair, saying that is the biggest wish of the country’s young people.

Other government organizations that wield power face the same demands, he added.

“I assess the prosecution to have reached significant standards in terms of political neutrality. Now, (the prosecution) should meet the people’s demands for reform in the next stage.”

Underlining that the prosecution has an important role in establishing a fair society, Moon said that the next task in prosecutorial reform is establishing an anti-corruption system that can operate regardless of who holds the post of prosecutor general.