Actress Yoon Ji-oh, who is under investigation for suspected fraud and defamation, lashed out at police for requesting an Interpol Red Notice for the Korean Canadian, despite her alleged crimes not being serious.

Women’s rights activists accused police of showing “surprisingly” strong determination to conduct an investigation into Yoon, saying she is under tighter scrutiny by police because she is a woman. 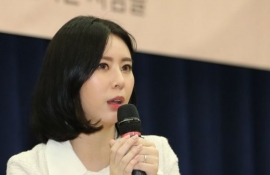 “A Red Notice is targeting those who committed heinous crimes such as those who committed economic crimes worth more than 500 million won ($433,000) or organized crimes and I haven’t done anything like that in the first place,” Yoon said on her social media account Thursday.

Yoon, 32, has been staying in Canada since April after several lawsuits were filed against her.

She is accused of damaging the legacy of a late actress Jang Ja-yeon by posing as a key witness to the alleged sex abuse scandal involving Jang and using donations for private purposes.

She said she had seen a suicide note written by Jang that included the names of men who she had been forced to provide sexual services to, and had raised donations.

Jang took her own life in March 2009, leaving a note that accused her agent of forcing her to attend parties and provide sexual favors to high-profile figures in the entertainment and media industries.

Korean police asked Interpol to issue a Red Notice for her as she has repeatedly refused Korean police requests to come back to the country for questioning. Interpol issued the Red Notice on Wednesday.