The first batch of Samsung Electronics Co.'s Galaxy Fold sold out on online stores shortly after its launch in China on Friday, according to industry officials.

The Korean tech giant rolled out the Galaxy Fold on online and offline stores in China at 10 a.m. for US$2,293, making it the 24th country where the company has rolled out the foldable device. 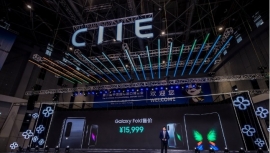 Jingdong.com, one of China's major e-commerce sites, said the Galaxy Fold sold out in just two seconds, and Samsung said on its Chinese blog that the smartphone stock was depleted just five minutes after its launch.

The size of the first batch of the smartphones is known to be around 20,000, with the phones only available in 4G models, according to industry officials.

The Galaxy Fold will be competing with Chinese rival Huawei's Mate X, which will go on sale next Friday with a price tag of $2,400. The Mate X will be launched only in China.

Rather than the Fold's in-folding design to reveal a larger screen on the inside, the Mate X has an out-folding display that's accessible even when the phone is closed.

Samsung, the world's largest smartphone maker, has struggled in China in recent years in the face of toughening competition with Chinese brands and is seeking to expand its presence with premium models.

Samsung saw its share in China's smartphone market fall back below 1 percent in the second quarter, retreating from 4.9 percent in 2016 and 2.1 percent in 2017, according to data from market researcher Strategy Analytics. (Yonhap)