Two North Koreans who entered South Korean waters on a fishing boat were repatriated, as they allegedly killed 16 fellow crew members on their boat, the Unification Ministry said Thursday.

The government returned the fishermen, who were in their 20s, through the inter-Korean border village of Panmunjom after they confessed to mutiny during an investigation conducted by South Korean authorities. 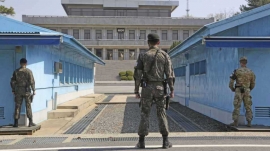 The two men were caught south of the Northern Limit Line, a de facto maritime border off South Korea’s east coast, on Saturday and were taken to a nearby port for investigation, the ministry said.

“The government decided to expel them, judging that they were not subjected to protection under the North Korean Refugee Act as they committed serious nonpolitical crimes such as murder,” the ministry spokesperson Lee Sang-min said in a briefing.

The two men could not be recognized as refugees under international law because they are felons who could threaten the lives and safety of people if they are incorporated into South Korean society, Lee added.

South Korea notified North Korea of its intention to send them back Tuesday and the North agreed to it the following day.

A ministry official said it will send the 17-ton squid fishing boat that carried the North Korean crew to the North on Friday. The boat was initially to be returned Thursday but this was delayed due to deteriorating weather conditions.

Officials said it took a couple of days for the South’s Navy to seize the North Korean boat, as it attempted to flee after crossing into the South.

The joint investigation revealed that three people, including the two who were returned to North Korea, conspired to kill the captain and killed 15 fellow crew members to cover up the crime while they were fishing for squid in Russian waters.

They are believed to have committed the crime in October in rebellion against the captain’s harsh treatment. The ship had left the port of Gimchek, North Hamgyong Province, the northernmost province of North Korea, in mid-August.

The three moved to the vicinity of Gimchek to sell squid to make money for their plan to escape to Jagang Island, a small islet of the North with few residents, but they fled the port when they saw one accomplice being arrested.