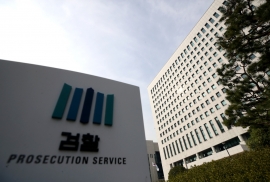 “I fully understand the gravity of the task that I am leading. I will do my best, considering it the last opportunity to reexamine the case,” prosecutor Lim Gwan-hyeok, head of the unit, told local news outlets.

The Supreme Prosecutors’ Office on Wednesday announced that it would establish a special body to address resurfacing doubts and unanswered questions about the deadly accident that killed some 300 people -- mostly high school students on a field trip to Jeju Island from Incheon. Many complaints have been filed to fix responsibility and deliver justice.

The special unit will ask the special committee currently looking into the disaster to hand over their probe records.

In 2015, a year after the accident, the government launched a special committee to find out what happened and who was responsible for the disaster.

A second committee took over the role in 2018 and revealed last month the latest findings that the Coast Guard at the time of the incident took more than four hours to transfer an emergency patient to a nearby hospital. The high school student died on his way to the hospital.

The committee also suspects the Navy and Coast Guard of tampering with the digital video footage of the Sewol ferry sinking. The footage is considered important in discovering whether the government timely responded to the accident and had exhausted all avenues in the rescue operations.

While probing the suspicions raised by the committee so far, the special investigation unit will also scrutinize the whereabouts of then President Park Geun-hye during the rescue hours. She has been criticized for not doing her best for the rescue operations.

The members of the special committee said they will file complaints with the court as early as mid-November against 122 former and sitting government officials, including ex-President Park and former Justice Minister Hwang Kyo-ahn, who is now the chairman of the main opposition Liberty Korea Party.

Inaugurated by Prosecutor General Yoon Seok-youl himself, the special investigation unit vowed a thorough investigation to one of the country’s most tragic disasters.