Final bidding wraps up for sale of Asiana Airlines

Bidders for the sale of Asiana Airlines, the nation’s second-largest air carrier, threw their hats in the ring Thursday for a last chance, raising market expectations as to the fate of the cash-strapped company. 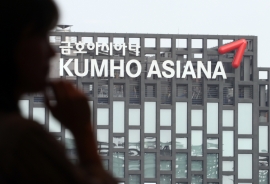 Kumho Industrial has put a 31 percent stake in Asiana Airlines up for sale. Three bidders -- Aekyung Group, Hyundai Development Company and Korea Corporate Governance Improvement -- submitted applications. Kumho and Credit Suisse, the lead manager of the sale, are expected to undertake financial assessments for a week or two and then pick a preferred bidder. They are likely to close a deal by the end of this year.

Aekyung Group and HDC have each partnered with financial companies for the prospective acquisition.

Confirming its bid, Aekyung Group said in a statement in the afternoon that it had submitted the required application and that having Asiana under its roof would create synergy since it also operates Jeju Air.

“There are many cases of air carriers strengthening their competitiveness through mergers and acquisitions between airline operators,” it said. Last month, Aekyung and Stone Bridge formed a consortium, while local fund KCGI joined hands with the BankerStreet private equity fund.

HDC and its partner Mirae Asset said they would wait to hear a “wise decision” from Kumho Industrial.

The sale price of Asiana Airlines has been estimated at around 2 trillion won ($1.72 billion) with 7 trillion won in debt, according to some industry observers.