In an event held at a hotel in Incheon on Wednesday, Incheon International Airport Corp. signed a memorandum of understanding with Portland International Airport in the US state of Oregon to conduct joint marketing activities to lure new airline customers and their routes in the United States and Canada, IIAC said in a statement. 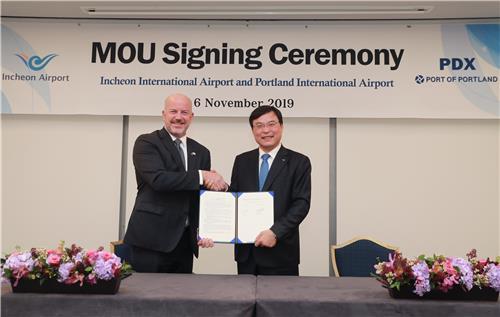 (Yonhap)
IIAC aims to increase the number of destinations that can be reached from South Korea to 200 as early as possible. Passengers currently can reach 191 cities in 61 countries from the Incheon airport in South Korea, a company spokesman said. (Yonhap)