Kim Kyoung-yong scored twice and Pak Il-gyong added another, as North Korea cruised to the victory in the semifinals of the Asian Football Confederation U-19 Women’s Championship at Chonburi Stadium in Chonburi, Thailand. Kang Ji-woo was the lone scorer for South Korea.

In the final scheduled for Saturday, North Korea will meet the winner of the other semifinals match between Japan and Australia.

The top three countries in this tournament will represent Asia at the 2020 FIFA U-20 Women’s World Cup in Nigeria. The third place match will also be played Saturday. 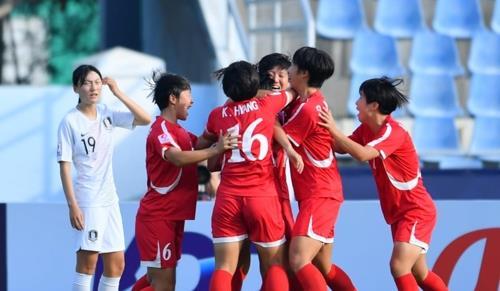 This photo provided by the Asian Football Confederation on Nov. 6, 2019, shows North Korean players (in red) celebrating their goal against South Korea in the semifinals of the AFC U-19 Women‘s Championship at Chonburi Stadium in Chonburi, Thailand. (Yonhap)
Kim Kyong-yong headed in the first goal in just the third minute of the match. Kim doubled the North Korean lead six minutes later.

North Korea went up 3-0 just eight minutes into the second half.

Kang salvaged a goal for South Korea in the 59th, but it wasn‘t nearly enough against the superior North Korean side.

The inter-Korean showdown in Thailand came three weeks after the senior men’s teams of the two Koreas squared off in Pyongyang in a World Cup qualifying match. North Korea hosted the match without spectators and media present, and there was no live broadcast of the match, after Pyongyang refused to issue visas for South Korean nation. (Yonhap)