South Korea have advanced to the quarterfinals of the FIFA U-17 World Cup for the first time in 10 years.

Forward Choi Min-seo netted the lone goal as South Korea defeated Angola 1-0 in the round of 16 match at Estadio Olimpico in Goiania, Brazil, on Tuesday (local time).

Coached by Kim Jung-soo, South Korea will face either Mexico or Japan in Sunday's quarterfinals. Mexico and Japan will meet in the round of 16 on Wednesday at Estadio Bezerrao in Gama. 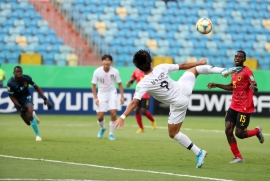 This is South Korea's third trip to the quarterfinals at the U-17 World Cup, and first since 2009. The country has never gone past the final eight.

After a cautious beginning from both sides, Choi broke the ice in the 33rd minute. After Jeong Sang-bin's attempt from the right side of the box was turned aside by goalkeeper Geovani de Carvalho, Choi was there on the opposite side to pounce on the rebound.

It was Choi's second goal of the tournament. He'd scored once in South Korea's 2-1 win over Haiti in group stage.

Choi had a chance to double his output in the second half, though his shot on a 79th minute breakaway went right at the goalkeeper.

Five minutes after the missed opportunity, Angola nearly tied the match on a header by Zini, and goalkeeper Shin Sang-hoon made a spectacular save to preserve the slim lead. (Yonhap)