HyunA is returning to the music scene Tuesday nearly after two years with “Flower Shower” crossing between Moombahton, pop and dance. Dawn, a former Pentagon member who recently changed his name from E’Dawn, is releasing his self-penned track “Money.”

The two made headlines for going public with their relationship last year, defying the industry norm in which idols’ love lives are kept private. 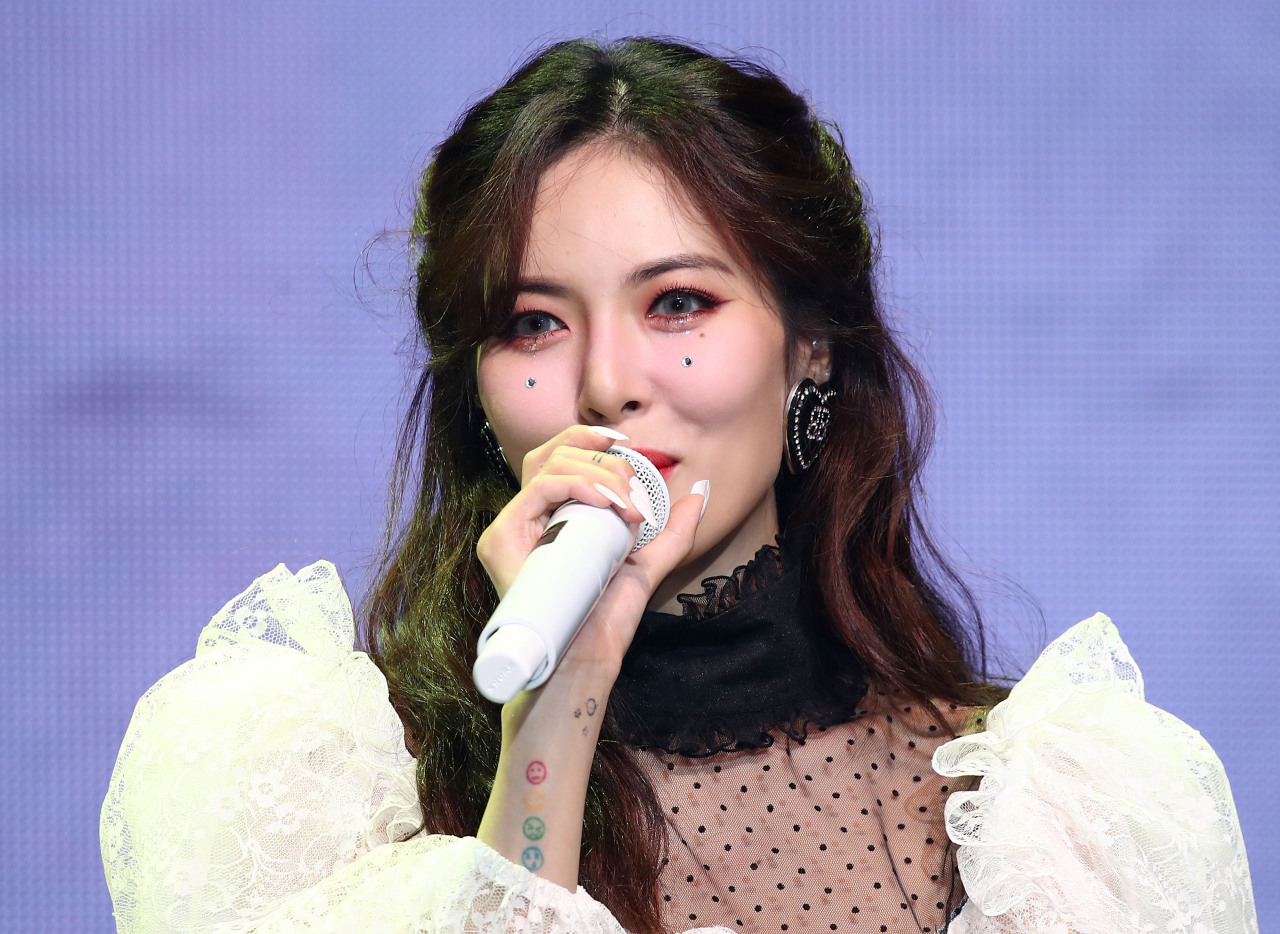 (Yonhap)
Both tracks, taking on heavy topics like life and money, mark their first release since their move to P Nation in January, a record label founded by Psy.

In “Flower Shower,” HyunA talks about blossoming and withering flowers which she draws parallels with her own life as a celebrity.

“You might think I’m just flexing given the title but I tried to convey its ambiguous meaning,” the singer spoke on her new single during the press showcase on Nov. 5.

“Flowers are beautiful and showy but I’m aware they all end up withering in the end. In the summer they blossom but they also need rest in the winter. Requiring love and attention yet too much of them could be deadly, I thought flowers and I are similar,” she said.

Her urge to blossom like flowers is reflected in the lyrics as the chorus goes, “Take a flower shower.”

Being released at the same time, “Money,” as the title suggests, is the former Pentagon member’s take on the value of money, packed with piano melodies and heavy synth bass and beats coupled with an emotional rap.

“We actually discussed what kind of music we wanted to make and received feedback before joining the same company nearly a year ago. Since then, I’ve put a great deal of effort into the making (of the record),” he said. 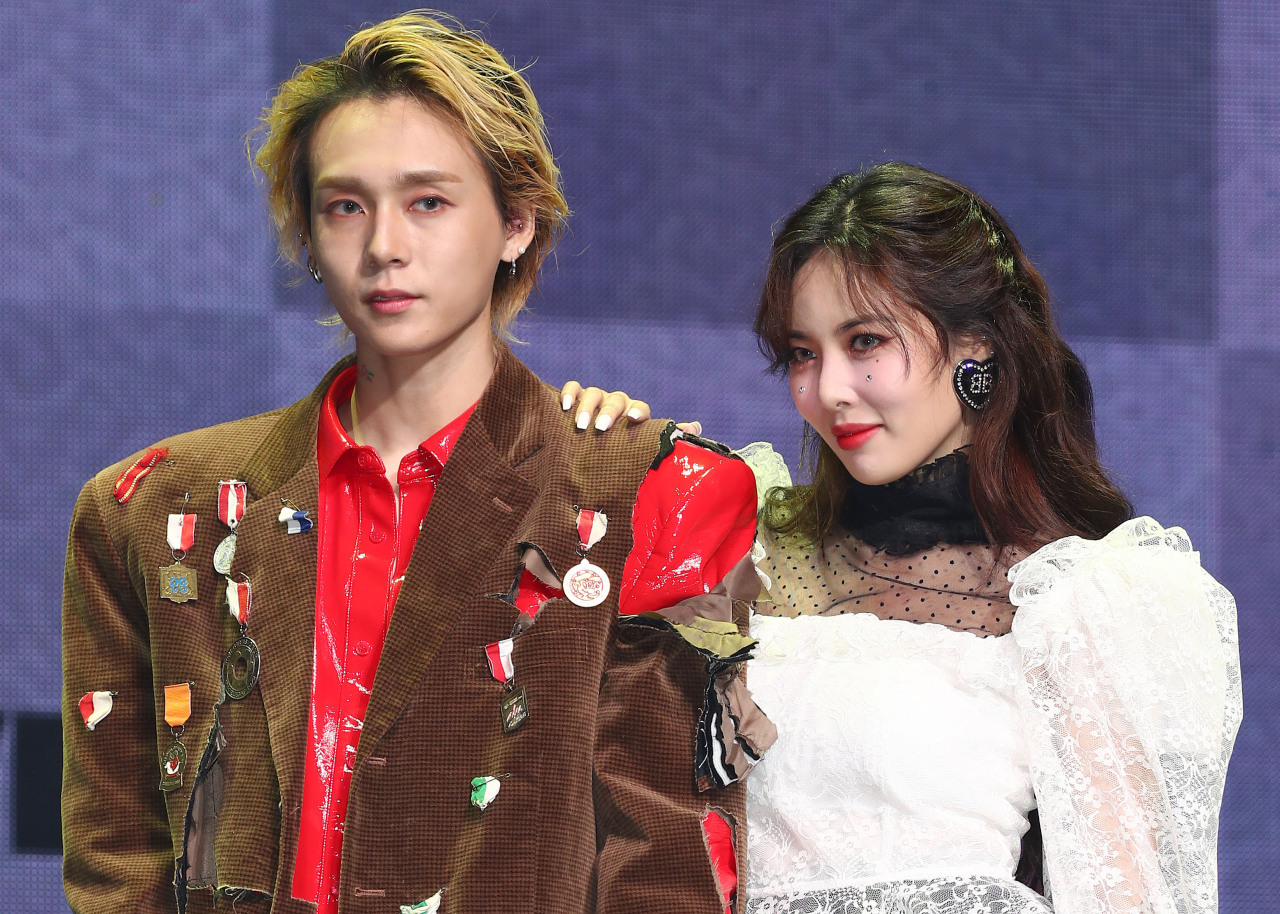 (Yonhap)
HyunA debuted back in 2007 as part of Wonder Girls before joining 4Minute and eventually going solo. And the 27-year-old with over a decade in the game under her belt is now working with the “Gangnam Style” singer Psy who founded Dawn and her label P Nation.

“Since it was Psy’s ‘Bird’ that inspired me to become a celebrity, there was great pressure. While working on ‘Flower Shower,’ he helped me progress and complimented me, giving me more responsibility and pushing me to work even harder,” she said.

In the summer of 2018, the couple -- stars in their own right who began their career as part of a group first -- made headlines after going public with their relationship. The bold move later forced the two to leave their former label Cube Entertainment but also gained respect from many fans for being honest and following their hearts.

And putting on a humble yet defiant front, the two used Tuesday’s press conference as an opportunity to clear the air once again.

“Some expressed concerns and thought I was being too honest. It was not an easy decision but once I made my mind up, I thought I needed to take responsibility. I just didn’t want to be just lie after lie,” HyunA said.

While she was worried about her boyfriend, it was Dawn that assured her that the two should “live with the decision they made.”

“Though he doesn’t speak much, he makes me able to smile beautifully on stage and stay confident. He’s my rock,” she added.

Sitting next, her beau Dawn said, “I have so much respect (for HyunA) for being so humble and considerate despite being a superstar.”