South Korea’s soft power on the global stage has greatly improved over the past few years as a result of the global popularity of K-pop, K-food, K-beauty and Korean goods in general.

To further enhance Korea’s status in the international community beyond Asia, Korea Foundation President Lee Geun said the country should form a presence among developed countries and develop a strategy to be perceived as “attractive.”

“For South Korea to be acknowledged in Europe (and other Western countries) we need people with an international sensibility to be present at events that are important for the Europeans,” Lee said in an interview with The Korea Herald at the Korea Foundation’s office in central Seoul on Oct. 28.

Lee, a professor of international relations at Seoul National University’s Graduate School of International Studies, was appointed as president of the nonprofit public diplomacy organization affiliated with the Ministry of Foreign Affairs in late September.

Public diplomacy is “a mechanism for countries to achieve their goal,” according to Lee, which is practiced in multiple ways, such as maintaining friendly ties, exchanging thoughts and ideas, cultural exchanges and creating favorable public opinion.

For instance, the foundation’s ASEAN Culture Center in Busan effectively contributes to Korea’s public diplomacy because it garners positive responses from visitors from the 10 Association of Southeast Asian Nations member countries, Lee said.

The Korea Foundation’s office in Jakarta, Indonesia, the eighth and most recent addition to its list of overseas offices, is the hub of the organization’s activities related to the New Southern Policy -- the Moon Jae-in administration’s key foreign policy, which envisions a people-centered community of peace and prosperity. The office will focus on the message of peace through political, cultural and people-to-people exchanges, according to Lee. 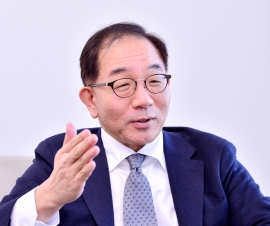 Lee pointed to Japan as a country with a successful track record of public diplomacy.

“Japan started public diplomacy at the end of the 19th century along with its imperialism. Imperialist countries go into other countries with an army of politicians, government officials, military forces, businesses and academia. So Japan has been building its network overseas ever since,” Lee said.

“It has made extensive efforts to spread its culture. For example, Japan’s Ukiyo-e had an impact on the French impressionist painters.”

On the other hand, public diplomacy is one area where China, a global power, lags behind other countries, according to Lee.

Lee explained the current state of China’s public diplomacy using his theory of the “soft power dilemma,” which governments face when their soft power reaches the domestic audience but is not accepted overseas.

“China’s ‘Chinese Dream’ makes the Chinese public proud, but it is not a good message outside (China). They are faced with a dilemma,” Lee said.

In tandem with forming a global presence, Lee hopes to raise awareness of Korea’s position as a developed country at home and overseas during his three-year tenure.

“We realize that South Korea is a developed country the moment we land at Incheon International Airport. But it is only in that moment. … We aren’t fully aware of our capacity and status. My goal and dream is to have Korea’s recognition abroad be commensurate with its capabilities and its development,” Lee said.

“In the past, countries became a powerful nation by winning wars against other power nations. But that is no longer valid nowadays. In the end, it has to be done through public diplomacy. We need to solidify a presence among developed countries.”