[ The Korea Herald – Send E-mail ]
Doosan Bears claw their way up to claim improbable Korean Series title
By Yonhap
Published : Oct 27, 2019 - 09:21
Updated : Oct 27, 2019 - 09:21
Back on Aug. 15, the Doosan Bears were nine games back in third place in the Korea Baseball Organization standings, far enough behind the league-leading SK Wyverns with 33 games remaining that the Bears weren't regarded as a serious threat to the Wyverns' bid for the regular season crown.

But the Bears toppled the Wyverns for first place on the final day of the regular season on Oct. 1. And some three weeks later on Saturday, the Bears celebrated the 2019 Korean Series title, the franchise's sixth championship and first since 2016.

Funny how this game of baseball works sometimes. 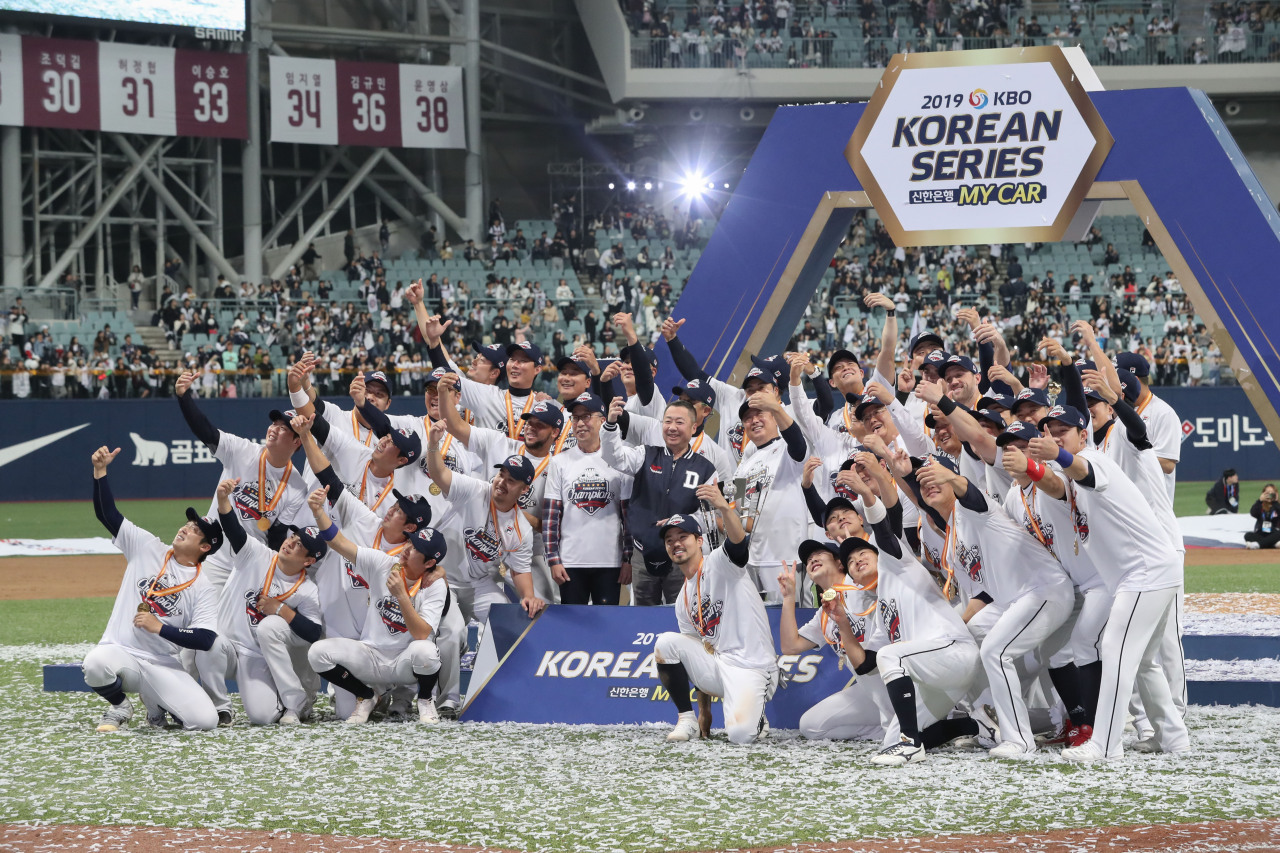 (Yonhap)
The Bears completed their four-game sweep of the Kiwoom Heroes with an 11-9 victory at Gocheok Sky Dome in Seoul on Saturday. But that they won four straight against the Heroes is perhaps less surprising than that the Bears played in the Korean Series at all.

The Bears clawed their way up the standings in September and won their last regular season game in walk-off fashion to lock down the top seed. By doing so, they also advanced directly to the Korean Series for their fifth straight appearance in the championship final.

If they had finished in second place, they would have had to play in the best-of-five penultimate playoff series, with the winner moving on to the Korean Series. The last time the Bears took that same route to the Korean Series was 2017, and they lost to the Kia Tigers in five games.

Teams getting a bye to the Korean Series have about three weeks off between the end of the regular season and the start of the championship series. Some teams handle these long breaks better than others, and the Bears, with the core of their players having already dealt with extended layoffs in previous Korean Series, showed no signs of rust against the Heroes. 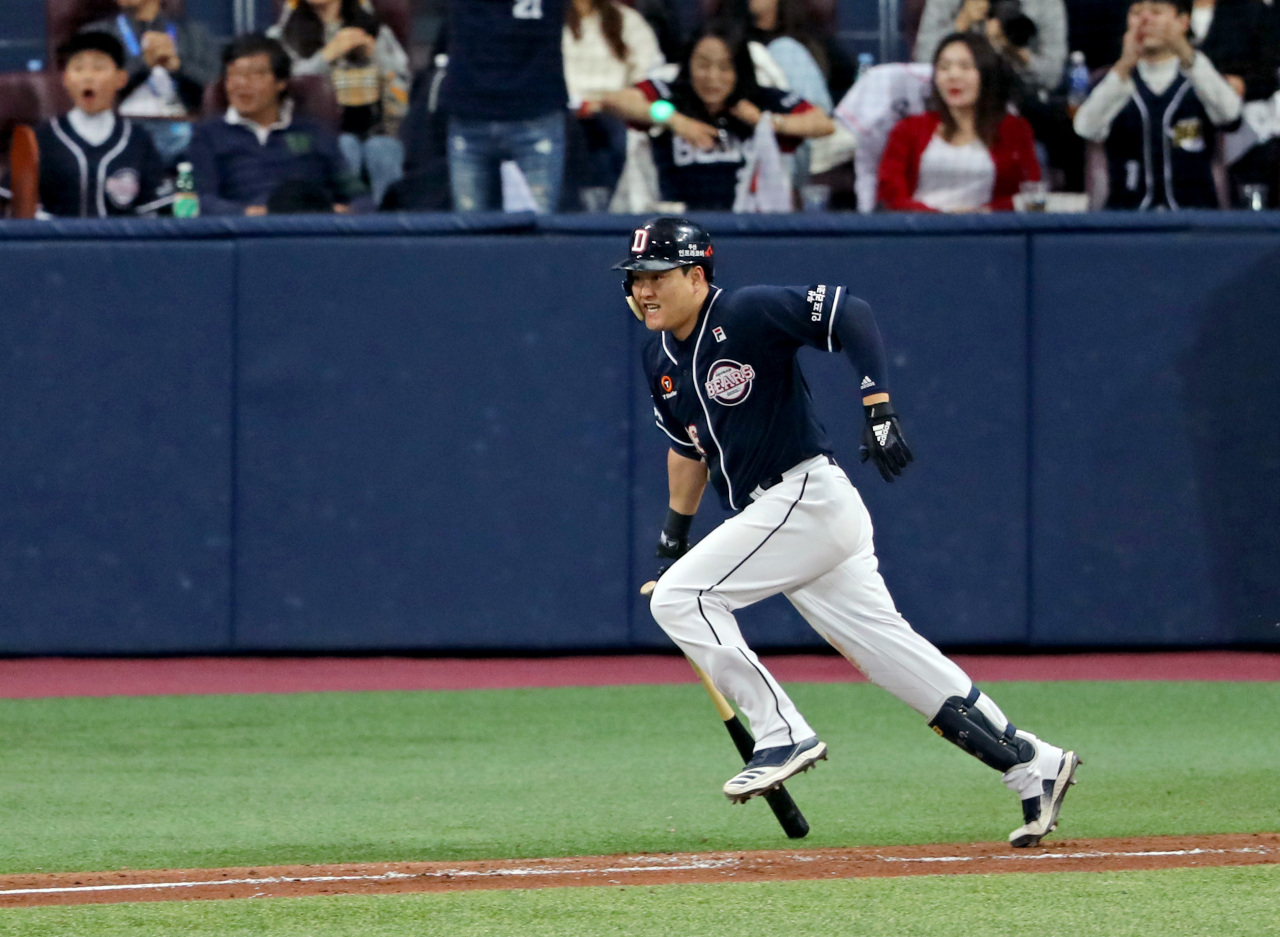 (Yonhap)
In Game 1, they blew a 6-1 lead before winning 7-6 with Oh Jae-il's walk-off single in the bottom of the ninth. In the next game, the Bears rallied from a 5-3 deficit with three runs in the bottom ninth, and Park Kun-woo's game-winning single made them the first team to win two straight Korean Series games in the last at-bat.

They didn't need all that drama to win Game 3 by 5-0. They put up a four-spot in the third inning, highlighted by Park Kun-woo's two-run blast, and rounded out the scoring in the eighth with Park Sei-hyok's RBI single.

The Bears dug deep into the reservoir of their firepower in Game 4. After giving up two runs in the bottom first, the Bears came back with three runs in the top second. The Heroes, with their backs against the wall, put up a six-spot in the bottom second to take an 8-3 lead.

The Heroes seemed well on their way to forcing a Game 5 for Sunday. But these Bears clearly don't like playing on Sundays, because they battled back with a run in the fourth and five more in the fifth to retake the lead at 9-8.

It stayed that way until the bottom ninth. The Bears had the Heroes on the ropes, as leadoff man Seo Geon-chang was down to his final strike against closer Lee Yong-chan with the bases loaded.

Seo sent a grounder to third baseman Heo Kyoung-min, who had the ball go off his glove and let the tying run score. 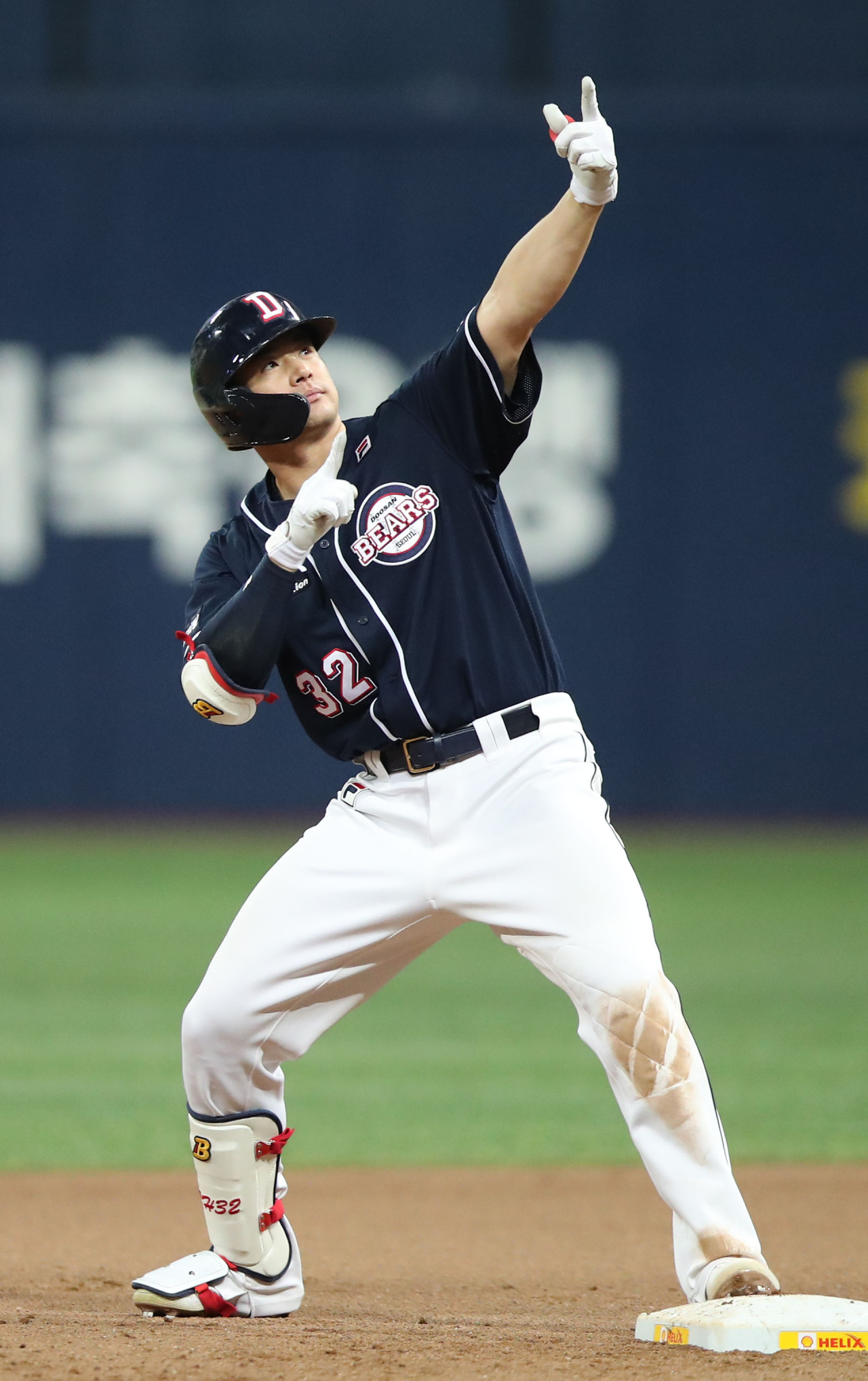 (Yonhap)
But the Bears had more late-inning magic left in them, with Oh Jae-il driving in the go-ahead run with a double and Kim Jae-hwan following that up with an RBI single for an 11-9 lead.

The way the Bears won Games 1, 2 and 4 was an apt microcosm of how their season played out down the stretch. When few gave them even a puncher's chance, they showed the heart of a champion.

This year's title erased the sting of losing to the Wyvern in last year's Korean Series. The Bears won the 2018 regular season title by a whopping 14.5 games but bowed out in six games to the Wyverns in the Korean Series, as their bats went ice cold.

They batted .295 in four games this time and made their manager Kim Tae-hyung the fifth KBO skipper with at least three Korean Series titles.

He started managing the Bears in 2015, and they've played in every Korean Series since then. Kim is only the second manager to reach the Korean Series in each of his first five seasons with a club.

Kim said after Saturday's victory that his first title, from 2015, remains his favorite of the three.

"I am really happy, but I am also just numb right now, for some reason," Kim said. "This year, Korean Series games felt like regular season games. I had to catch myself and realize we were in the Korean Series."

Kim said he was worried about the momentum that the Heroes had built by winning the two previous postseason rounds, but he felt the pendulum had swung in his team's favor after winning Games 1 and 2 in walk-off fashion.

During Kim's tenure, the Bears lost a few All-Star caliber players via free agency, but they've managed to remain a perennial contender. He gave credit to the remaining players for stepping up every time.

"We just have to keep taking care of business with the players that we do have," Kim said. "We couldn't afford to think about the guys that already left. I personally didn't care all that much that we lost some players. And the players who stayed rallied around each other really well." (Yonhap)