Emails between a South Korean record importer and a US record dealer reveal that SuperM’s debut record, released only in the US, was sold here with an assurance that the sales will be reflected in the US charts.

In the conversation, obtained by The Korea Herald, record importer Hani Music secured a supply of records from a dealer that reports sales to Nielsen SoundScan, which powers the Billboard music charts. 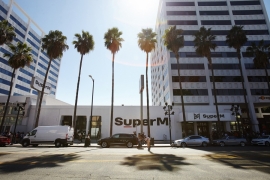 The company previously said they sold at least “thousands of copies” of the hybrid K-pop group’s debut EP in Korea through local online retailers like Yes24 where four out of the eight group and individual versions are ranked in the top 50 sales chart.

The emails also suggest at least one S.M. Entertainment official was aware of the chain of distribution that affects Billboard’s charts as early as early September.

Collaborating with Capitol Music Group on the newly minted act, the Korean entertainment company said the marketing strategy in the US is set by Capitol.

Until recently, the company’s official S.M. Global Shop had stated that “all orders officially count for the Billboard Chart” on its social media platforms, before changing its wording to suggest only US albums sales count toward the chart.

A screenshot of online retailer Yes24 shows SuperM's debut album being sold with an item description which states the sales will count towards the Billboard chart.

The seven-piece group became the first ever K-pop act to top the Billboard 200 chart with a debut record with 168,000 units, of which 164,000 were pure album sales.

Despite its symbolic achievement, the No. 1 record faced mixed reactions over bundle deals and the unconventional makeup of its album sales units in an age of streaming.

In a separate article published on Oct. 18, Billboard reiterated only US purchases are counted for the charts without further elaboration. But the question remains how chart officials keep track of overseas sales if a record importer purchases albums from a registered local dealer that reports the sales to SoundScan -- which are then shipped to Korea.

Both Capitol Records and Nielsen were contacted for their response but have not yet replied.