He also requested their keen attention to South Korea's efforts to play a bigger role on the global stage, as he hosted more than 110 foreign ambassadors serving in South Korea and their spouses to a Cheong Wa Dae garden reception. 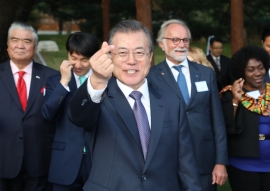 It marked Moon's first formal invitation for all of the heads of foreign diplomatic missions in Seoul since his inauguration in May 2017.

"South Korea is now challenging the historic change of denuclearization and permanent peace on the Korean Peninsula. We are facing the last wall," Moon said in his welcoming remarks. "Moving beyond that wall is the only way to open a bright future without turning back to the age of confrontation."

To that end, he added, the international community's support and cooperation are inevitable, in addition to foremost efforts by the two Koreas and the United States.

He recalled news reports that the members of the Diplomatic Corps made a tour of a Demilitarized Zone trail that was opened to the public in accordance with the Sept. 19 inter-Korean military deal last year.

Moon also reminded them of his offer of turning the DMZ into an international peace zone, which he presented in his UN speech last month.

He proposed that the world work together to remove landmines in the DMZ and set up UN and other international institutions there.

"I believe it's a path for the international community to make peace  with action," he added, expressing hope that foreign ambassadors in Seoul take part in the "historic journey" to open the road of peace.

The president also stressed the role of diplomacy in revitalizing the world economy through "fair and free trade" and responding to climate change.

He also asked them to put their weight behind the South Korea-ASEAN special summit to be held in Busan in late November and the second P4G summit, which Seoul will host in June next year. P4G stands for Partnering for Green Growth and the Global Goals 2030, a public-private initiative to tackle climate change and other sustainable development challenges.

Moon invited the ambassadors of 113 countries with standing diplomatic missions here and those of 111 nations attended it, according to Cheong Wa Dae. Representatives from 17 international agencies with offices in Seoul were on hand as well.

The Venezuelan and Marshall Islands ambassadors sent prior notices of absence, citing other engagements.

Japan's outgoing ambassador, Yasumasa Nakamine, was also present, as his successor, Koji Tomita, has not yet presented his credentials to Moon, a Cheong Wa Dae official said.

Cheong Wa Dae had a similar group reception for foreign ambassadors here once under the Park Geun-hye administration. There were three such events when President Lee Myung-bak was in office. (Yonhap)