Alex Mustonen, co-founder of New York-based studio Snarkitecture, talked about breaking some of the biased perceptions that people have about architecture at the Herald Design Forum 2019 on Thursday.

“A lot of time, we think of architecture as something quite serious. I think the same limitations that people have with art can also be applied to architecture. They are seen as something that has to be looked at and not necessarily something that they can engage with,” Mutonen said. “One of our goals is to bring as many people to the table as possible.” 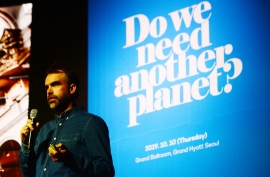 During his speech, Mutonen showed various projects that successfully achieved this goal mainly through reinterpreting everyday structures and material. He explained that Snarkitecture transformed them into something utterly new, inviting visitors to engage with their surroundings.

One of them was the “beach” project, which transformed the grand hall of the National Building Museum in Washington into a sea of translucent balls in 2015. His company also installed lounge chairs and umbrellas to simulate a beach-like environment. The project successfully achieved its goal as many visitors dived into the pool freely.

Addressing questions about how he maintains his project to provide the intended experience, he said Snakitecuture does control minor factors like making the users take off their socks when they enter.

However, he added that in most cases, his company tries not to interfere with how people engage with the project that they created. “We do not think there is one certain way (to interact with our project),” he added.

“We had a ping-pong table that was fully white on the top. It was custom-built and very expensive. They used it in their office for around six months. They played ping-pong quite aggressively so the top of the table was mostly damaged. But it was not an issue (for us),” Mutonen said.

He also showed a project that his company conducted in Miami in 2012. Snarkitecture reworked the 15 letters from “Miami Orange Bowl,” which was installed as a sign for the city’s old stadium that had been torn down to build a new stadium.

“With letters that were already there, we buried them and differently scattered them (on the ground),” he said. He explained that the differently installed letters encouraged people to get closer and interact with them instead of just looking up at them. “It invited them to climb on,” Mutonen said.

Mustonen studied at the Irwin S. Chanin School of Architecture at the Cooper Union for the Advancement of Science and Art in New York. He co-founded Snarkitecture in 2008 with his colleagues Daniel Arsham and Ben Porto.