Plastic can be a valuable material if effectively upcycled, argued Dutch designer Dave Hakkens in his speech, “The Power of an Open Source” at the Herald Design Forum 2019 held at Grand Hyatt Seoul in Yongsan-gu, central Seoul on Thursday.

“Less than 10 percent of the plastics (used around the world) get recycled. For companies, it’s just easier to buy new plastic. The plastic waste is burned, sent to landfills or to the ocean,” he said.

Hakkens said, he started to tackle the issue with pens. Surprised by how pens thrown away generate heavy plastic waste, he created ens made of edible plastic and ink to reduce waste. 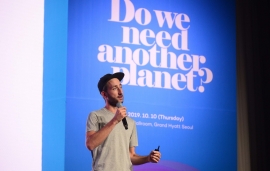 After pens, he moved onto phones.

“After two years or so, people usually throw their phones away. This creates a lot of electronic waste and there will just be more and more. If you can replace parts and components (of a phone), you do not have to throw away your phone every two years,” he said.

The project titled Phoneblocs, creates a modular phone that allows users to replace the components as needed. Uses can also customize their own phones.

Multiple companies showed interest in the project and the designer worked with a big tech firm to actualize the idea, but the project was eventually dropped, as the firm wanted to focus on other priorities.

But for Hakkens, the project reached some of its goals.

“The goal was to gather people to support, help a company see that there may be a market for this. People started sharing and supporting (the idea),” he said, explaining that it provided an opportunity for the industry to pay more attention to the environment.

“What I learned from the project is, it is kind of dangerous to put projects into hands of big companies. They can just kill the project,” he said. “I really wanted to build a strong community so that the idea cannot be killed. That is the Precious Plastic project.”

For the Precious Plastic project, Hakkens created a workshop, and chopped (the plastics) into small pieces and built them into something new -- everyday products such as hats, balls or buckets. The project formed a global network which invited more than 300 people from across the world to participate, spreading out to Korea, Hungary, Indonesia, Taiwan, Mexico, Vietnam and more.

“With the instruction videos, everyone in the world can just jump in,” he said. “The community can improve (the project) in their own way.”

The designer is currently working on improving the fourth edition of the Precious Plastic project. The result is to expected by the end of this year.

“Recycling is what we like to do now. But how about we stop making new plastics? How can we replace them in a more natural way?” he said.

Another project coming along is Project Kamp. He is thinking about building a new community that can be sustainable, harvesting energy themselves.

“Because I live in a developed world, a lot of infrastructure around me is wasteful. We kind of have to rethink the whole way we live,” he said.