Michael Govan, director of the Los Angeles County Museum of Art, on Thursday talked about the importance of cultural diversity when managing an art museum, at the Herald Design Forum 2019.

“To survive in an increasingly globalized society, we need to understand each other’s cultures,” Govan said. “We have arts of all time and places. We have 150,000 objects for our collections and one and a half million people come to see this. We also have 4,000 education programs to show art from every time, place and culture.”

He added that LACMA’s building is designed to show different cultures equally. “Our museum building is entirely horizontal, so there is no one culture on the ground floor and other cultures upstairs,” he said. 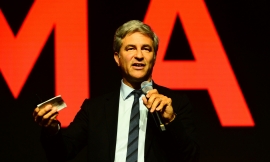 The reason for this design was that museums with multiple floors tend to see fewer people going upstairs. “Everything is flat. We do not have a hierarchy or even front and back,” he said.

While highlighting the importance of showcasing different cultures, he added that it is also crucial to have “local uniqueness.”

To show this, a garden of palm trees and “Urban Light,” an artwork that consists of LA street lamps, have been installed outside the museum.

Govan noted that it is important for a museum to be approachable and to provide visitors opportunities for communication.

“Banks, libraries and museums that were built in the late 19th century -- they all had this idea of wanting to be like ancient Greece and Rome. They all have stairs to go to the museum,” he said. “It is a problem now, as a contemporary society wants the museum to attract everyone.”

Instead of having a European style, he decided to create a public space where visitors can openly communicate with one another.

“Creating public space, I think we underestimate this value,” Govan said. He also placed a restaurant near the entrance -- a move considered risky at the time -- to create a more casual environment, with the aim of attracting people to the museum.

Since 2006, Govan has been responsible for overseeing all activities of the museum, from its art programming to its expansion and upgrading. Its 8-hectare campus now features new buildings by Renzo Piano.

Since he took office, the museum’s average annual attendance has doubled to more than 1 million. Drastic changes to the museum have been made, such as the acquisition of more than 32,000 pieces for its permanent collection and the doubling of its gallery space.