Herald Design Forum asks world: ‘Do we need another planet?’

In an era some are calling the “Anthropocene,” marked by significant human impact on Earth’s geology and ecosystems, mankind may be facing an imminent decision about the future of this blue marble. Global warming, exhaustion of natural resources and worldwide pollution may be spelling out an inconvenient truth necessitating interstellar travel for solutions.

The annual Herald Design Forum opened Thursday with a rather provocative question: “Do we need another planet?”

“What is the limit to the sustainability of the Earth’s environment? And is it the planet that is in peril, or the civilization of humanity? We seek to exchange wisdom and insight through the forum,” Herald Corp. Chairman Jung Chang-sun said in his opening speech at the forum.

This year’s Herald Design Forum was held at the Grand Ballroom of Grand Hyatt Seoul hotel. In the ninth year since its inception in 2011, the forum sought to step beyond artistic values to encompass the issue of how design can contribute to sustainable life on the planet.

“When we talk of design, we tend to associate it with the exterior (looks). But design is beyond that. It accompanies the change in the essential (of the object). To change the preexisting order and culture, to improve the life of humans. Design has contributed to the evolution of civilization,” Prime Minister Lee Nak-yon said during his congratulatory message delivered at the opening ceremony.

“This year’s theme (of the Herald Design Forum) appears to reflect the sense of urgency that the situation has become so dire that the Earth may need to find another planet. Such issue has been worldwide since long ago, but collective action has been lacking. I hope that experts from in and out of Korea can gather their knowledge (at the forum).”

“Rather than focus just on the aesthetic point of view, bringing about essential changes to the world is becoming a key characteristic of design,” Park said. “I dream of the world in which everyone is a social designer.”

Actress and environmental activist Gong Hyo-jin opened the event with a keynote speech on the importance of daily decisions that may impact the world, urging people to take action to protect the environment every chance they get.

Following Gong to take the stage was founder of Studio Roosegaarde, Daan Roosegaarde on “Landscape of the future,” along with the CEO and Wallis Annenberg Director of the Los Angeles County Museum of Art Michael Govan, who spoke on “Designing a 21st century context for the art world.”

Art director at Daimler Alexander Mankowsky spoke next with “Ethics by Design: Informed trust, an interaction concept for self-driving cars based on empathy,” followed by “Finding Earth-like planets in our galactic neighborhood” by Ignasi Ribas, director of the Institute of Space Studies of Catalonia and a researcher at the Institute of Space Sciences, Spanish National Research Council.

Maria Lisogorskaya, a founding director of London-based architecture, design and art collective Assemble, gave a lecture titled “Work, play, eat. Nine years of Assemble,” which was to be followed by a speech from Alex Mustonen, a co-founder of New York-based design studio Snarkitecture. Capping off the daytime forum was Dutch designer Dave Hakkens with his message, “The power of open source.” 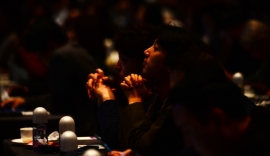 Participants listen to a lecture during Herald Design Forum 2019 at the Grand Hyatt Seoul on Thursday. (Park Hae-mook/The Korea Herald)

Various issues were discussed at the forum, ranging from sustainable development in city planning -- a subject that is highly relevant to a metropolis like Seoul -- the effect of design related to the development of automobiles, urban restoration and ecofriendly design to even the issue of finding potentially habitable planets in nearby galaxies. Urban restoration has been a key project of the Moon Jae-in administration, which has slated 50 trillion won ($41.8 billion) for efforts through 2022.

In the evening an “Art Night” stand-up dinner event designed to facilitate a more casual meeting between the participants and speakers will be held.

The night will kick off with a speech on ecological issues in the era of automation by media artist Bae Jae-hyuk, a member of Korean media group teamVOID that creates works combining art and technology.

It is to be followed by a performance by four-piece band Muto fusing traditional Korean instrumental sounds with electronic dance music, integrated with visual and lighting effects. A networking event accompanied by sounds from Muto’s producer DJ Bumho will wrap up the night.

With its 10th anniversary coming up, this year’s Herald Design Forum sought to extend the event beyond a one-day forum. From 2012, the forum has been hosting “Herald Design Week,” including a design market, English presentation contest for university students, networking party and other events.

This year’s Herald Design Week included the launch of “BRO.Colle.” In collaboration with design firm Bros, the BRO.Colle program from Sunday to Thursday invited top designers in Korea to speak and interact with the next generation of designers.