Award-winning South Korean actress Gong Hyo-jin, who has also made a name for herself as a popular fashionista, shared her inner conflict as an environmentally conscious fashion model, encouraging the public to take small steps every day to save the environment.

“I have a nickname, ‘fashionista.’ Part of my job as a model is to convey, ‘Isnt’ this pretty? Would you like to purchase one?’ But since I saw this data, I have been experiencing an inner conflict, inner contradictions,” Gong said.

Gong was the keynote speaker at this year’s Herald Design Forum at the Grand Hyatt Seoul, held under the slogan “Do We Need Another Planet?” 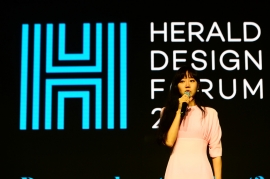 Promoting fashion brands, which means always suggesting that people dress up in the latest styles, clashes with her values because of her concern about environmental issues, she said in an interview.

To explain, Gong referred to UN data showing that massive amounts of water are used to dye clothes every year -- some 5 trillion liters -- not to mention the fact that the fashion industry is responsible for about 10 percent of all greenhouse gas emissions.

“It felt like it was cowardly to keep the conflict to myself. I thought about what I could do and I created an upcycling project,” Gong added.

Gong co-founded “Super Magic Factory” about two years ago in an effort to save the environment by transforming discarded materials into fashion items. But her interest in environmental issues goes back much further -- in 2010, she published a book of essays on animals and nature.

For people who may feel overwhelmed about tackling environmental issues, she has some encouraging words, suggesting they should become more aware of the choices they are making and take action when possible.

“I hope this moment will be a starting point for myself and the audience to be inspired for Earth. The most important thing is to be aware at all times,” Gong said.

“Bearing a bit of inconvenience is the start. Starting today, I will be more conscious,” she added.

The award-winning actress has been in the entertainment industry for some 20 years since her 1999 debut in the horror film “Memento Mori.”