‘Everyone has something to give back’

“It’s not hard at all to have a conversation with you right now, but if you had just gone for a week without any food, I assure you, you might not be so easy to talk to,” said Michael Kim, who founded the nonprofit organization Korea Legacy Committee four years ago to fight poverty among senior citizens here. 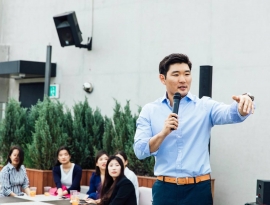 He was responding to questions on whether such support merely ends up perpetuating the problems of underprivileged elderly.

“I won’t ever say the KLC will remove elderly poverty, but maybe we can give them some happiness in their hard lives.”

Originally from the Bay Area in San Francisco, Kim is the APAC partnerships manager at Google for Startups. Before Google, he led global business development for LinkedIn’s profile and higher education product teams.

He also served as senior director of corporate development for Baedal Minjok. Since falling in love with Korea, he has lived in the country for four years now.

South Korea’s relative poverty rate among senior citizens aged over 65 stood at 45.7 percent in 2018, above the average of 12.9 percent for countries in the Organization for Economic Cooperation and Development.

“This is not an elderly problem. This is a Korean problem,” said Kim, stressing the issue transcends generations. This is why the KLC is a group consisting mainly of concerned, younger people -- particularly millennials. Kim believes this generation has it in them to make the change Korea needs.

“This generation is one mindset away from revolutionary change. Koreans have the infrastructure, education and mindset. I literally want to build a platform that young people can see and believe in. This will be the largest youth movement in 10 years,” said Kim.

To get more young people involved, Kim communicates his beliefs to students and kids whenever he can.

“I tell them everything we have now is because the (older) generation worked so hard. My dad didn’t have 5G. My grandma lived in colonized Korea. So we have all come pretty far in a very short period of time.”

To his surprise, many students told him nobody had ever really told them about such things -- how much the older generation contributed for the country.

“But once they do know, once the awareness is raised, they usually want to do something about it. It’s simply that the culture of philanthropy has not been taught here. It’s not about people, not the country,” said Kim, adding that he hates it when people call the nation “Hell Chosun.”

On Oct. 18, the organization will hold its Gala Night event at the Four Seasons Hotel to help raise awareness and funds. Past guests include members of the popular JTCB program “Abnormal Summit” and Park Mak-rye, a grandmother who is a well-known YouTuber.

But it is not only about the money raised, or the number of branches, though scaling up will definitely help the KLC give back more.

“If you just sit there, then nothing will happen. Give back what you got, and you will be surprised how much the community will change. Everyone has something to give,” Kim said. “Legacy means this continues to go on after we all die. It’s our responsibility.”