While South Korea has vowed to phase out fossil fuels and turn to clean energy to combat climate change and air pollution, it is supporting coal-fired power plants elsewhere -- like in Indonesia.

The government is virtually contributing to environmental damage as well as corruption in Indonesia by financially supporting Korean companies that are building coal-fired power plants there, according to an environmental activist.

“The land has been contaminated so much that we cannot plant fruits anymore. The seawater is also severely contaminated, so the number of fish in the sea has plummeted. We have to go a long distance to catch fish,” said Meiki Wemly Paendong, executive director of West Java at WALHI, an environmental organization in Indonesia, during an interview with The Korea Herald on Monday morning.

“The pollution levels have worsened, with many locals contracting respiratory diseases,” he said. “Local residents (living near the coal-fired power plant) feel that the plant is ruining everything.”

“After witnessing the damage done by one coal-fired plant, we don’t want any more,” he said.

There are about 3,000 households, who rely on mostly farming, fishing and sea ponds for a living, in the proximity of the 660-megawatt Cirebon 1 coal power station built by Doosan Heavy Industries. 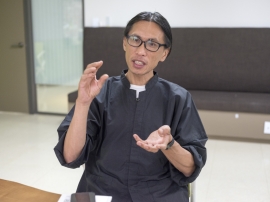 On Monday, Paendong testified at a parliamentary audit in Korea on the environmental damage being done by the Korea-funded coal power station and bribery allegations involving Hyundai Engineering & Construction.

Building of the 1,000-MW Cirebon 2 coal-fired power plant in West Java, Indonesia, began in 2016, with Export-Import Bank of Korea providing a 600 billion won ($501 million) loan for the project. The construction is set to be completed in 2022.

During a court trial, then-Cirebon regent Sunjaya Purwadisastra, who is implicated in other corruption allegations, admitted to receiving a total of about 6.5 billion rupiah ($460,000) from Hyundai Engineering through a broker in exchange for facilitating the construction of the plant which faced strong protests from the residents living in the vicinity of the Cirebon 1, according to Indonesian media reports.

Indonesia’s Corruption Eradication Commission has already questioned some 140 people linked to the corruption allegations as part of a sweeping investigation.

Korea is the world’s second-largest investor in the global coal-financing market -- mostly in Vietnam and Indonesia -- following China.

Over the last decade, Korea has invested a combined 11.6 trillion won in 24 coal plant-building projects in seven countries through state-run banks, including the Export-Import Bank of Korea, the Korea Development Bank and Korea Trade Insurance Corp.

There are some 124 coal-fired power stations in Indonesia, with the majority of them funded by China, Japan and Korea.

While the Indonesian government is considering suspending at least half of the plants in the wake of worsening environmental pollution, Korea plans to fund the construction of two more 2,000-MW coal power plants -- Jawa-9 and Jawa-10 -- in Suralaya, Indonesia.

Doosan Heavy won the 1.6 trillion-won project in March, with Eximbank having expressed its intent to finance the project. The construction was set to begin at the end of this year for completion in April 2024.

Indonesian activists filed a suit with a Korean court in August, asking Korean export credit agencies to stop funding for the project.

“The investment is encouraging bribery in Indonesia. We ask the Korean government to halt financing coal-fired power plants in Indonesia,” the activist said.