“We need to make efforts to get to know and respect ASEAN through deep understanding of their cultures and people in order to create an intimate community,” he said in a recent interview with The Korea Herald at the ASEAN-Korea Center in Seoul. 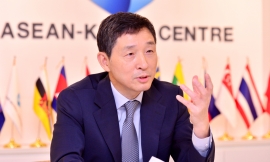 The United States’ “America First” policy and similar policies adopted by China and Russia have led Korea to seek to strengthen its strategic leverage beyond its major partners.

“The era has come where reinforcing relations and developing cooperation with ASEAN countries perfectly fit the interests of South Korea, which seeks to open up a new diplomatic horizon,” Lee said.

Korea has long viewed ASEAN as a potential market, but the country did not pursue it as it focused on its own rapid industrialization and economic growth.

“We’ve got to try to move away from excessive focus on the economic aspect and make bold investments for cultural, academic and people exchanges,” said Lee, who served as ambassador to Vietnam and the Philippines before heading the center.

Leading those efforts has been the ASEAN-Korea Center, an intergovernmental organization that promotes economic and sociocultural cooperation between ASEAN and Korea, established 10 years ago.

Lee believes that Korea and ASEAN have the potential to further develop relations for the next 30 years.

“South Korea and the ASEAN nations don’t have many obstacles in joining hands for cooperative development and peace in the region. There’s no historical baggage. They basically are able to share each other’s feelings culturally and emotionally.”

His advocacy of people-oriented diplomacy is in line with President Moon Jae-in’s New Southern Policy, announced in 2017, which aims to elevate partnerships between the two sides.

The initiative places people at the center of the policy with the “3P” pillars -- people, prosperity and peace.

In tandem with such policy commitments, the ASEAN-ROK Commemorative Summit will be held in Busan from Nov. 25-26.

As a side event for the summit, the center will organized the ASEAN-Korea Train under the theme of “Advancing Together,” which promotes people-centered connectivity between ASEAN and Korea.

“The train trip is designed to help ASEAN people experience various aspects of Korea, including the natural environment, culture, economic situation and the people, for a deeper understanding and relations-building through the broad personal network that will be formed during the event,” he said.

Lee hopes that the some 140 people from ASEAN and 60 Koreans invited to the event will play the role of honorary ambassadors after the train journey around the country, which includes stops at major attractions in Seoul, Gyeongju, Busan, Suncheon and Gwangju.