[News Focus] Portion of optimists over economy stays at 13%: poll

SEJONG -- A variety of polls show that the public disapproval rating for President Moon Jae-in now outstrips his approval rating.

According to a survey from Gallup Korea, the portion of respondents who expressed negative opinion toward the president, exceeded the supporters for him for the sixth consecutive week since August.

In the pollster’s latest survey, conducted on Oct. 1-2, 51 percent of the 1,000 citizens polled expressed disapproval of Moon’s performance, while the approval rating stood at 42 percent.

Out of those who expressed disapproval, 29 percent picked personnel affairs, such as Moon’s appointment of Cho Kuk to justice minister in early September despite several allegations against him, as the main reason for their negative opinion. 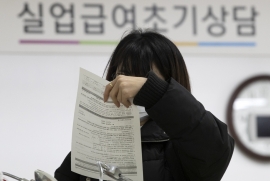 A citizen looks at her application form for unemployment benefits at a regional office of the Korea Employment Information Service in Seoul earlier this year. (Yonhap)

Notably, still a large portion were expressing their discontent with the incumbent administration’s performance in economic affairs including ordinary households’ living conditions. Following the personnel affairs, “lack of capability in the economic sector” ranked second among picks of the opponents of Moon.

Over the past two years, a large proportion of self-employed people have closed their businesses and joined the growing number of jobless people. Further, the state payment of unemployment benefits has risen to an all-time high.

The Moon government started providing some young jobless people with 3 million won ($2,500) for six months per individual, while the number of middle-aged people who lost their jobs has drastically increased.

The spike in apartment prices under the Moon government has frustrated many households. Prices of some apartment complexes in southern Seoul soared by 70 to 100 percent in only two or three years.

On the other hand, many households that moved from the capital to satellite cities or those residing in Seoul without owning homes face a sense of deprivation due to a drop or standstill in home prices.

According to the Korea Customs Service, outbound shipments dropped by 9.8 percent during the January-September period on an on-year basis.

The GDP growth rate for this year could possibly fall to the lowest level since 2009, when growth stayed at 0.8 percent as the nation weathered out the global financial crisis.

Many microbusiness owners, including self-employed individuals, have had to close up shop as a result of the huge cost burden the Moon government imposed by implementing drastic minimum wage hikes in 2018 and 2019. 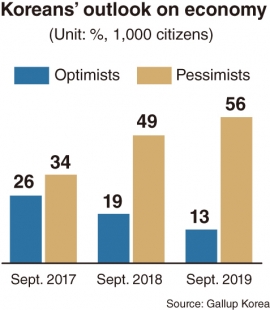 According to the previous poll by Gallup Korea, conducted on Sept. 24-26, 56 percent of the 1,000 respondents said economic conditions would worsen in the coming months

In contrast, only 13 percent were upbeat about economic conditions. Another 26 percent said the economy ahead would remain roughly the same.

By region, Daegu-North Gyeongsang Province topped the list in the proportion of pessimists, with 67 percent. Busan-Ulsan-South Gyeongsang Province ranked second at 62 percent, followed by Gyeonggi Province-Incheon at 57 percent, Sejong-Daejeon-Chungcheong at 55 percent and Seoul at 53 percent. The pessimist ratio was 41 percent in Gwangju-Jeolla provinces.

Men exceeded women by 59 percent versus 53 percent in the pessimistic outlook on the economy.

By job, 63 percent of self-employed respondents picked a worsening economy in the coming months, trailed by housewives with 61 percent and retirees with 56 percent.

President Moon Jae-in -- just after he was elected in May 2017 -- showcased an electronic dashboard to the media, which was set up in the presidential office for the purpose of monitoring the number of jobs created.

A large portion of people, including young people, were pinning high hopes on the new administration. But they have not seen the president pose beside the dashboard at any time in the 29 months since.

A professor from the Labor Research Institute of Korea University was quoted by a news outlet as saying that “the recent improvement in youth hiring could be attributed to an increase in part-time or short-term jobs rather than an improvement in stable jobs.”

Moon will pass the halfway point in four weeks, finishing the first 30 months of his 60-month term.