[Herald Interview] ‘What is Korean is what is most global’

In 1965, a group of history majors from Ewha Womans University visited Sosu Seowon in Yeongju, North Gyeongsang Province, a Confucian academy built in the 16th century during the Joseon era (1392-1910).

The simple, relatively uneventful field trip ended up kicking off a series of events that saw nine of the “seowon” -- Korean neo-Confucian academies -- being inscribed on the UNESCO World Heritage List over half a century later.

“I was struck by the grace of the wooden buildings that were in harmony with nature, the centuries-old trees surrounding the seowon. As a history major, I was moved by nature, by our traditional buildings, and by the stories of the people that blossomed from that environment,” said Lee Bae-yong, chairperson of the Conservation and Management Foundation of Seowon.

“I saw the spirit of the era. The idea (behind seowon) that sought to teach youngsters that rather than just living for oneself, one should have a vision to contribute toward making the world a more peaceful place, and toward fostering youth,” she said of the trip that effectively set off her ambition to promote her country and its culture to the rest of the world. 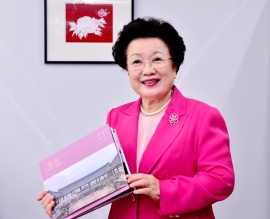 In July 2019 Lee was in Baku, Azerbaijan, with a group of Confucian scholars, government officials and other people who had worked with her to gain recognition for the academies as South Korea’s 14th UNESCO world heritage.

The decision cemented the seowons' place in the cultural heritage of humanity. It was a feat that took nearly nine years to accomplish, and its champions had overcome a bitter setback four years earlier.

A seowon, which literally means a “house of books,” refers to one of the educational facilities of the time that served as libraries, publishing houses and venues for discussing social and political matters. Basically, a seowon is where Confucian scholars were welded, and where they expanded their intellects through debates and by honoring those who had paved the way.

“A seowon was never a training facility to prepare for national exams. The priority was to be a better person ethically, which included loyalty to one’s country and love for one’s parents,” Lee explained.

A lifelong educator, Lee took every opportunity she had to promote the facilities to outsiders during her tenure as president of her alma mater. The list of seowon visitors on her watch included former US President George W. Bush in 2009, whom she accompanied to Byeongsan Seowon in Andong, North Gyeongsang Province.

After her time at Ewha ended in 2010, she was entrusted with building a new image for South Korea as the head of the Presidential Council on Nation Branding. “The job was to elevate the class of our country and its brand, making it a trustworthy and likable nation in the eyes of the international community.

“While hallyu and business enterprises all play a part, the traditional culture (of Korea) provided a strong foundation that stands out from other countries. So I thought these foundations can move those across the world, motivating them to visit more, and ultimately raise the status of the country.”

The following year the Seowon Foundation was born. 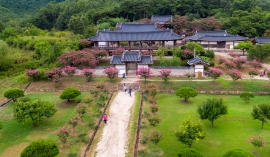 Choosing candidates for recognition by UNESCO was an issue on its own. While up to 670 academies stood on the Korean Peninsula at one point, the nationwide order by the regent Heungseon Daewongun in the late 19th century to shut down all seowons was a major strike. So were Japan’s colonial rule and 1950-53 Korean War. There was also a basic issue that wooden buildings are more susceptible to decay brought forth by father time.

“We submitted the application in 2015, but ICOMOS (UNESCO’s International Council on Monuments and Sites) told us that it wanted us to clarify the difference between Confucian academies in China, why we chose these nine facilities, and a guarantee that they will be sufficiently preserved once they were inscribed,” she said.

Lee and the foundation retracted and worked on the issues.

“The seowons are spread across the country, across nine regional governments. We (the foundation) had to work to get them to work together, coordinate the efforts,” she said.

Confucian culture calls for regular memorial service and accompanying preservation efforts, but it was not to the standards of the UNESCO. This was the biggest hurdle the foundation faced: preserving the heritage and ensuring that the efforts will continue. “It was a very difficult working environment, yet the member (of the foundation) remained unchanged for much of the nine years...When the decision finally came, we were almost on the verge of tears.”

In 2019, ICOMOS acknowledged that the seowons hold “outstanding universal value,” a key criteria for the UNESCO to deem it worthy of being called a world heritage. A couple of months after the recommendation, they were finally inscribed, and Lee and the foundation celebrated in the way only they can.

“Korean cultures is one of honor and courtesy, and everyone -- east or west -- loves manners. This is also our tradition... So we dressed up in our traditional hanbok and offered our respects,” she said. In a coordinated work, the Confucian scholars and the Korean team bowed in a respectful manner to those at the podium, leaving an impression on the international society.

“I’ve heard that the number of visitors to the regions (where seowons are located) jumped by five to six times compared to before. Tourists from in and out of Korea are noticing it because they are world heritages. Their status has changed drastically because their values have been verified (by UNESCO),” Lee said. “This will contribute greatly in terms of tourism. And it is an honor for the entire country. Because while economic development is important, it should start from the development and promotion of culture.”


Future for seowon and cultural heritage of Korea

Why is UNESCO inscription so important? Lee said it motivates the people to preserve them.

“We need to promote (heritages) above all else to preserve them. If we know nothing about them, even precious stones can appear as just stones. By tagging a story along the trees, structures, remains that we used to pass by without noticing, we can preserve their values,” Lee said. “We have to promote them (heritages) and the values in order to preserve and pass them along to the next generation.”

These values mean a great deal to the entire humanity, Lee noted.

“There are values that remain unchanged, and we can learn about how to be a better person through seowons or old temples. Despite the technological advances, there are some lessons and values that the technology cannot replace.”

She mentioned that traditional Korean culture is key to promoting Korea to the rest of the world because she believes, “what is most Korean is also what is most global,” meaning the things that epitomizes the value and spirit of Korea can be what is most appealing to the global community.

“There are traditions that are priceless, yet are on the verge of disappearing because people don’t know about it. By finding these traditions and preserving them, sending them to the UNESCO, we can find values that are worth sharing with the rest of the world,” she said.