Typhoon Tapah battered Jeju Island and the southern region of Korea on Sunday with strong winds and heavy rain, leaving at least one person dead and seven injured.

The typhoon, packing wind gusts of 126 kilometers per hour with an atmospheric pressure of 970 hectopascals at its center, was traveling northeastward from Jeju Island at a speed of about 35 kilometers per hour as of 3 p.m., according to the Korea Meteorological Administration.

A two-story house collapsed at 10:25 p.m. Saturday in Busan, killing the 72-year-old woman who lived on the first floor. 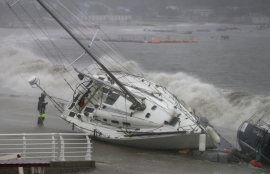 Three people were treated for injuries Sunday morning. One had been knocked down by strong winds, another was hit by a brick from a church building and the final was hit on the head by the roof of a bike storage facility. The remaining four were hurt by glass in a school gym that shattered.

There were also hundreds of reports of shattered glass, power outages, fallen lampposts and uprooted trees across the nation, according to fire authorities.

Some 391 flights arriving and departing from Jeju Airport as of 4 p.m. had been canceled Sunday, according to the Transportation Ministry, as a wind shear warning went into effect.

As of 4 p.m., typhoon warnings had been issued for Jeju Island and southern parts of the country, and ocean wind warnings were issued in most areas of the seas, the agency said. 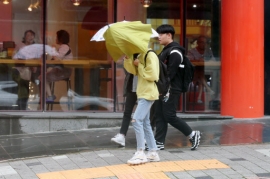 Parts of Jeju Island had received 668.5 millimeters of rain, and Sancheong County in South Gyeongsang Province had reported 257.5 mm of rainfall as of 3 p.m., the weather agency said. More than 3,000 homes were without power on Jeju as of 4 p.m. Sunday, according to Kepco.

Tapah’s fastest wind speed measured was 40.6 meters per second at Jeju Island, or 146.2 kilometers per hour.

The southern region of the country and towns along the east coast were expected to be under the influence of Typhoon Tapah until Monday morning.